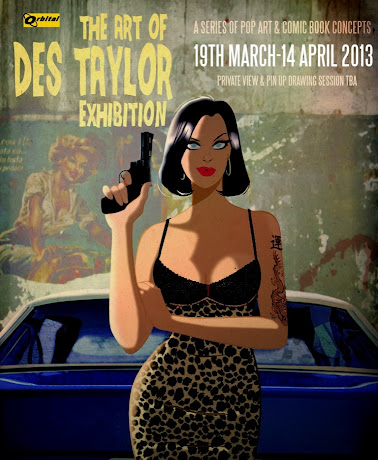 Orbital Comics has announced an exhibition of limited edition art prints and sketches by British illustrator DesTaylor will open at their Central London store later this month.

Born and bred in Tottenham, London with a passion for comic book and Pop Art fused with an obsession for retro film and 1950's pin up girls, Taylor's client list includes the likes of Michael Jackson, Theo Fennell, La Perla, FHM, Cosmopolitan, Ministry of Sound, Universal Music, ITV Studios, and many more. His faux superhero "LIFE magazine" cover art lit up the internet last year and was the talk of conventions from London to San Diego.

This exhibition will feature pieces from his vast collection of artwork influenced by fashion, classic comics, Pop art Icons and his love for screen sirens of the 1950′s and 60′s.

He will also be promoting art from his latest upcoming creator-owned book Scarlett Couture Investigations and The Trouble With Katie Rogers, which has recently been optioned by ITV Studios America. An artbook will be on sale exclusively for this event as well as tickets for a scheduled Pin-Up Art Class, where budding artists can join Des in sketching one of his stunning muses - Nina Hearne.

• Des Taylor speaks about this upcoming Exhibition with the Orbiting Pod during London ComicCon: www.orbitalcomics.com/the-orbiting-pod-lscc-2013-interviews

• To see more of Des's art visit his blog www.despopart.blogspot.com or his Facebook page- https://www.facebook.com/DesTaylorFanPage