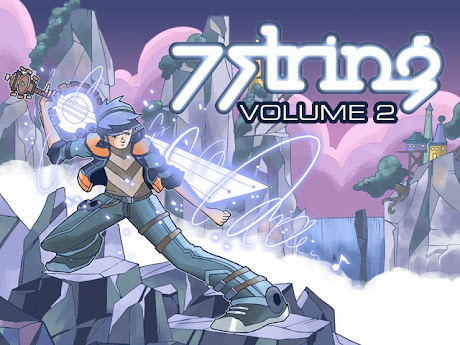 Following a recent publishing deal with Zeta Comics, 27-year-old artist and writer Nich Angell has become one of the first British comic creators to launch a Kickstarter campaign, to fund the second installment of his book 7String.

Aimed at a 12+ readership but enjoyed by people of all ages, 7String is a full colour adventure graphic novel about a boy with a guitar sword, heading out on an epic quest into a world of music. Wielding a guitar-sword, Zach fights to defend everything he loves by using tempo, volume and genre against instrument-wielding foes.

Aside from his own comics Nich, who lives in Salisbury, produces work for Titan Magazines, VS Comics, Mattel, features in various exhibitions, and has worked with the BBC. He's been touring comic conventions to promote 7String since the beginning of last year, and says he has received fantastic feedback from consumers, reviewers and fellow comic creators. 7String is currently stocked in a number of stores nationwide and Nich signed on with Canadian publisher Zeta Comics in August 2011, and the first volume of 7String was published in July 2012.

The first book has already received rave reviews from peers and critics alike, and now Nich's hoping to continue the success by appealing for fans worldwide to collectively donate £10,000 to fund the making of Volume 2.

Kickstarter is a crowd-funding website that can be used to gather any sum of money to fund a range of projects and products.Previously it was primarily for projects in America, it opened its doors to UK-based projects earlier this month.

Funding is normally open for one or two months, and curators are able to set their own target amounts. If they fail to reach that amount, the project is not funded and nobody is charged. If the project surpasses its target, there is no ceiling on how much can be raised in the time limit.

Nich is hoping to be one of the first few in the UK to successfully achieve his target goal before the month-long opportunity closes on 9th December.

He's at Thought Bubble this weekend, where he will be exhibiting his work and also taking part in a question and answer panel about upcoming series VS Comics.

• The Kickstarter Project can be found at http://www.kickstarter.com/projects/234373302/7string-volume-2?ref=live

• For more information on Nich and his work, visit www.nichangell.co.uk