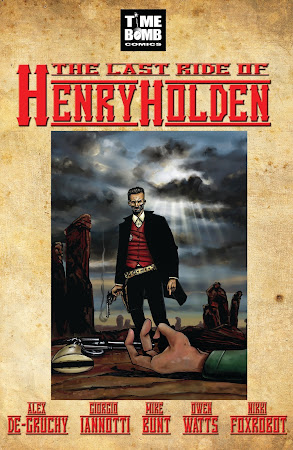 The next release from Time Bomb Comics will be officially launching at this weekend's Leeds Thoughtbubble Convention - along with at least 45 other new comics from other publishers and the first British Comic Awards.

Written by Alex De-Gruchy with art from Gorgio Iannotti & Mike Bunt, the publication of the 56-page graphic novel The Last Ride Of Henry Holden marks five years of publishing history for the Birmingham-based comics publisher.

Since 2007, Time Bomb Comics has regularly been publishing an eclectic range of one-shots and graphic novels from both brand new and established comic creators. The Last Ride Of Henry Holden - which will also be available through Diamond’s Previews catalogue - is a grim tale of Old West redemption set in the year 1871, written by Alex De-Gruchy with artwork by Giorgio Iannotti and Mike Bunt, colouring by Owen Watts and lettering by Nikki Foxrobot.

It will be on sale at Thoughtbubble at a special launch price of £6.00, along with Time Bomb’s full range of titles, which include Dick Turpin and the Crimson Plague, London Calling by Stepen Walsh and Keith Page, and Kronos City.

• For more information on this and any other Time Bomb Comics visit timebombcomics.com