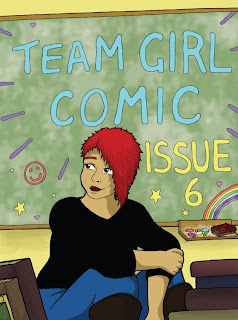 The Glasgow based collective Team Girl Comic will be appearing at Thought Bubble on the weekend of 17/18 November 2012 where they will be releasing their new Issue 6 complete with a colour cover by MJ Wallace.

Earlier this year TGC ran a Kickstarter campaign to raise money to fund Issue 5 and this proved so successful that the collective were not just able to print Issue 5, for which they increased the page count to 44, they were also able to reprint their sold-out earlier issues. Issue 5 was even adapted for Kindle and it is available via Amazon.

In addition to all six issues of their main title for sale at Thought Bubble, they will also have a selection of new TGC tote bags, postcards and badges available for sale as well as a selection of solo offerings by various Team Girl Comic contributors. These will include framed prints by TGC Issue 5 cover artist Coleen Campbell and TGC editor Gillian Hatcher's other titles, Go Wildlife which is also available on Kindle, and the flip comic Taxidermy Tales co-produced with Adam Smith.

Glaswegians won't be missing out on the Issue 6 action as the collective has scheduled a launch night for the issue at The Old Hairdressers in the city's Renfield Lane on Sunday 25 November starting at 7pm. They plan to turn the mezzanine floor of venue into a mini comic mart with a "drink 'n' draw" station. Entrance to the launch night is free and there are more details on the event's Facebook page.

Team Girl Comic issues are available to buy from their online shop as well as selected comics shops in Glasgow, Edinburgh and London.

Team Girl Comic will be at Thought Bubble 2012 and their table is number 7 in the Royal Armouries Hall.
Posted by Jeremy Briggs at 7:00 am