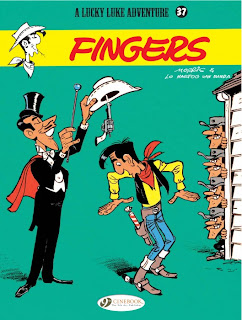 Roll up! Roll up! That master of bandes dessinee humour Maurice De Bevere, also known as Morris, will astound and amaze you with his work illustrating the man who shoots faster than his own shadow, known to one and all as Lucky Luke, and introduces the prestidigitator, the one and only Gaston, also known (unfortunately) as Fingers.

The smart, handsome, immaculately dressed and intensely charming European illusionist Gaston has been arrested due to his inability to stop himself pick-pocketing anything and everything from those around him. Taken to the Texas prison that the four Dalton brothers are currently in, he lifts the prison keys from a guard and escapes with the Daltons. Lucky Luke has heard it all before, or so he thinks, before he realises that there are five prisoners that need rounded up and not the usual four. Catching the Daltons and Gaston just as they are playing cards, Luke discovers just how good Gaston is at sleight-of-hand as cards change, guns disappear and bullets become blanks. 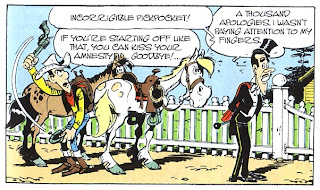 With Gaston's help, Luke returns the Daltons to prison and petitions the Governor for amnesty for Gaston, who agrees provided that Lucky Luke takes responsibility for him. However things take a turn for the worse when Gaston lifts the feathers from three Indian warriors and the tribe's medicine man decides that the two paleskins must be sacrificed with a magic hatchet for the offence Gaston has inflicted.

Fingers dates from 1983, after the death of Morris' long time Lucky Luke writer Gene Goscinny, when he worked a variety of other writers on the books. This one was written by the rather spectacularly monikered Lo Hartog Van Banda whose plot is as sharp and quick as Gaston's fingers are. The story revolves around Gaston's apparent kleptomania, he even manages to lift a horse shoe from Jolly Jumper, and his ability to twist what is happening at any given time to his own benefit. Indeed for much of the book it is hard to decide if Gaston is actually the dandy-ish magician he portrays or actually a criminal mastermind who thinks so much faster than everyone else that his plan seems like little more that a game to him. 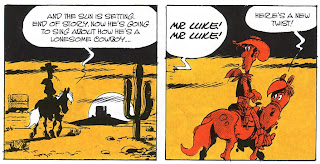 Morris keeps up with all the goings-on with a much larger cast of characters than normal in a Lucky Luke book as Van Banda plays with some of the conventions of the series including the traditional last panel of Luke riding off into the sunset happening in the middle of the book as well as the end.

Lucky Luke - Fingers is as fast moving as the titular character's digits and, for me, just as funny as any of the Goscinny titles.

• There are more details of the English language Lucky Luke books on Cinebook's website.

• There are more details on the original French language Lucky Luke on the official Lucky Luke website (in French).

• Cinebook will be selling their range of books including Lucky Luke at the Comica Comiket Fall 2012 Independent Comics Fair in the City Of London on Saturday 10 November 2012 and at Thought Bubble's Royal Armouries Hall in Leeds on the weekend of 17-18 November 2012.
Posted by Jeremy Briggs at 7:00 am