In Review: Berlin - The Seven Dwarves 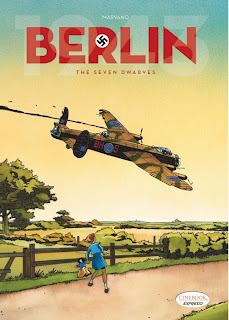 The Cinebook Expresso collection brings together interesting  bandes dessinees that do not fit into the various series that the company normally publishes. Berlin - The Seven Dwarves, written and illustrated by Marvano (Mark Van Oppen) is one such book.

In 1993 on a disused RAF base in Lincolnshire two elderly women meet for the first time, brought together by their remembrance of a pilot who flew from the base during World War II. The older of the two women hands a doll to the younger as well as a letter from the pilot which she asks her to read.

In is 1943 and Lancaster bomber S-Snowwhite and its crew of seven young RAF airmen are taking part in the 'Thousand Bomber' raids against Germany, watching the fires burn in the cities below them as the enemy night-fighters and flak eat away at the aircraft around them. 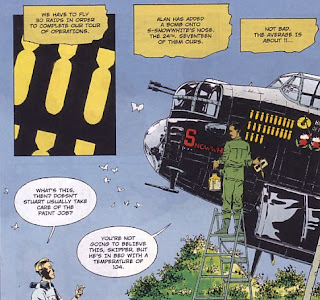 S-Snowwhite's pilot is Flight Sergeant David "Aubie" Auberson who has survived 17 of the 30 sorties he needs to complete his tour of operations - the average number aircrew survive is 11. Cycling in the country to take his mind off things, he meets a young girl called Lisa with a doll she calls Snow White, a girl who was affected by the bombs dropped by German bomber crews over London three years before. They talk before Aubie has to return to base to take off on his latest sortie, to bomb the heart of the Reich - Berlin.

Morvano's artwork is striking with lots of lovely blue skies and open country during the daytime while the night time raids are claustrophobic and dark, illuminated only by fires and explosions. His depictions of the Lancasters are impressive and their German predators, the unusual Dornier Do 335 A-6 in the earlier raid and a Junkers Ju 88C in the later one, are accurately presented yet never overdone. 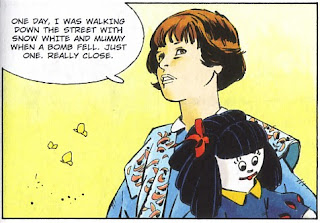 But Seven Dwarfs isn't just about how this affects the aircrew but how it affects the men and women back at the base. He even draws parallels with the Blitz to show how aerial bombing affects the people on the ground. Yet perhaps the greatest strength of the book is that it is told as a flashback from the reading of the letter in 1993 allowing the feelings of the pilot to be directly expressed to the reader.

Berlin - The Seven Dwarves could so easily have been a gung-ho bloodfest, instead Morvano creates a compelling story of the lives and deaths of bomber crews in World War II and the effect they have on the people around them. It is as good as any war comic that I have ever read, whether written by Garth Ennis, Pat Mills or anyone else you may care to mention.

There are two other books in the Berlin series, Reinhard Le Goupil (Reinhard the Fox) set in 1948 about the Berlin Airlft and Deux Enfants De Roi (Two Children Of A King) set in 1963 about the Berlin Wall. If either of these are even half as good as The Seven Dwarves then I hope that Cinebook will be looking to translate and publish them as well.

There are more details of Berlin - The Seven Dwarves on the Cinebook website.

There are more details of the Berlin series at the Dargaud website (in French).

Cinebook will be selling their range of books including Berlin at Thought Bubble's Royal Armouries Hall in Leeds on the weekend of 17-18 November 2012.
Posted by Jeremy Briggs at 7:00 am