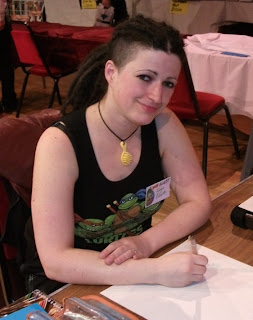 With her long dreadlocks now replaced with a Venus Bluegenes-style mohican, Edinburgh based artist Tanya Roberts continues to make a striking impression at comics conventions from California to Germany as well as in the UK. She has been drawing the comic strip in Titan's Star Wars: The Clone Wars comic for some four years now and yet, despite being a professionally published Star Wars artist for so long, her work is not that well known as the title is aimed at a junior audience. Jeremy Briggs spoke to Tanya about The Clone Wars and her other work.
downthetubes: What comics did you read as a child and did they inspire you to start drawing?
Tanya Roberts: The comics that I read were largely the ones I could get a hold of. I read a lot of Tintin, Asterix, 2000AD, Beano, Dandy, you know? A British kid's staple comic diet.  I grew up in Africa so whatever I could get my hands on that looked like a comic I consumed hungrily. However I always preferred watching animated movies and would draw 'storyboards' of little stories that I wrote, which came in handy later on when my career in traditional animation (RIP) never left the ground. 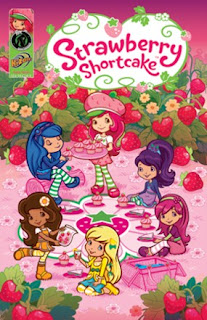 DTT: What titles have you worked on?
Tanya: The first professional thing I got asked to do I am still doing today, Star Wars: Clone Wars - that was four years ago! It's great to be affiliated with one of the most recognisable brands in the world. I've also worked for Boom! Studios with Toy Story where I had to make Disney and Mattel happy and have worked for Ape Entertainment drawing Strawberry Shortcake. It's fun to draw but it's so sweet I HAVE to watch crime shows while I'm drawing it to balance out the cute!

DTT:  How did you get started on Star Wars: The Clone Wars and were you a fan of the Star Wars universe beforehand?
Tanya: I contacted Titan about how on earth I could draw Transformers (please, please) and they came back and asked me what I thought about drawing Star Wars instead. I thought it might be a good trade. I had been to Comic Con (in San Diego) that year and had seen Lucasart's HUGE character display for The Clone Wars so when I watched it I was hooked. I'm lucky to have a nerdy dad who introduced me to the original Star Wars movies so, of course, I was already a fan. 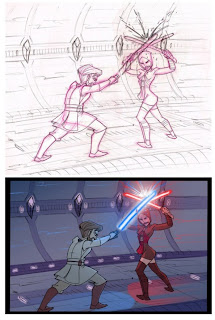 DTT:  How much input or control do Lucasfilm have over the contents of The Clone Wars comic and did this pose any issues when you first began on the title?
Tanya: I have discussed this with a few Star Wars artists and Lucasarts are very open to whatever vision you might have for the characters. They're brilliant people to work for, I pretty much just make up aliens and spaceships and they just let me (sometimes) get away with stuff. I put a nipple tassel on a Hutt in one issue and they didn't reprimand me, which was nice.

It's very refreshing to have so much leeway with such a large company and I wish more companies where less strict and covetous of their characters and property. After all, we each bring our own style to the property so what fun is it if we're all leashed up and muzzled?

DTT: How would you describe your style of artwork on the various comics you have worked on?

Tanya: Cartoony, really, but quite angular. Disney with angles maybe? I have an artistic path I'm following and a working style I want to get better at. It's great that I get hired based on that style alone, I'm glad people seem to like it.

Having an animation background helps because some companies want you to stick rigidly to their model sheets. Surprisingly Disney let me get away with more than I thought I could; with Rex (the dinosaur in Toy Story) I made him a lot more bendy than he is in the movies but they did have to call me on some of the poses. 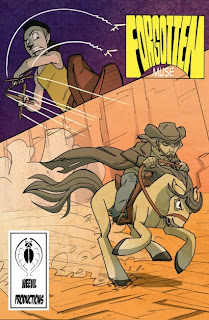 DTT: The majority of your professional work has been on licensed properties. Do you have any plans for working on your own characters?
Tanya: It has been fun as well to draw already well loved characters in my style and I want to continue doing that, but I have always worked on my own characters and stories - just for the laugh.

I'm actually self publishing my very first comic that will be launched this November at Leeds comic festival: Thought Bubble. The comic is called Forgotten Muse and it's about a muse who has to deal with the fact that his guy is being distracted by the internet and television, and how he gets around it. If anyone is interested, details are available on my website.

DTT: Tanya, thanks for taking the time to talk to us.
There are more details of Tanya Roberts' work on her Enolian Slave Deviant Art site and her new website The Art Of Tanya Roberts.

Tanya provided the publicity artwork for the 2012 Hi-Ex comics convention. She was interviewed in  the run up to the con by the BBC News website.
There are more details of Titan's Star Wars: The Clone Wars comic on the Titan Magazines website.

There are more details of Kidzoic's Strawberry Shortcake titles on the Ape Entertainment website.

Tanya will be appearing at Thought Bubble in Leeds over the weekend of 17/18 November 2012 where she will be selling copies of Forgotten Muse as well as pages of her original artwork. Her table is number 29 in the Royal Armouries Hall.
Posted by Jeremy Briggs at 7:00 am