Pick up a Puffin comic? 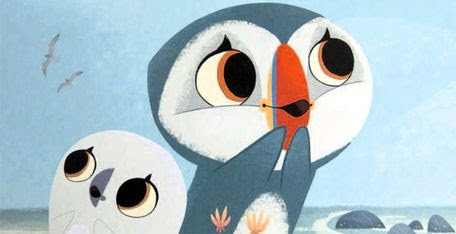 Penguin Children's Puffin Books have delighted children for decades, but now the imprint is set to make a major foray across multiple media with a new animated show for young children. Will it include comics, we wonder?

Penguin recently announced it had partnered with Ireland-based animation studio, Cartoon Saloon (producers of The Secret of Kells, Skunk Fu, the new movie Song of the Sea, and segments for Baby Cow and Moone Boy) and Northern Ireland's producer of kid's media, Dog Ears (creators of upcoming animated TV series Miss Rosie Red), to co-produce Puffin Rock as a multi-platform brand - including a 39 episode animated TV series as well as digital and physical format books, and apps.

You have to wonder if they're looking at a tie-in magazine, too.

Puffin Rock revolves around a family of puffins, including a young puffling, Oona, and her little brother, Baba, as they explore the sea, land and sky around their island home. The puffins share the island with various creatures, including an elusive mermaid.

The Belfast Telegraph, which recently ran a feature on the new show and the rapidly-growing Dog Ears company, reports the characters in the seven minute episodes will not speak but will make Puffin sounds, while a narrator talks.

The Belfast Telegraph also reported Dog Ears is looking for to take on 14 new staff next year. Anyone interested in applying to be an animator with the team can find details on www.cheersdogears.com