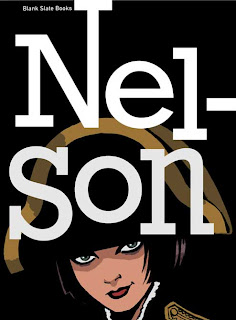 (Updated 19/11/12): The winners of the first British Comic Awards were announced at Thought Bubble last night. If you were at the Awards Ceremony, I hope you were pleased by the results.

This was the first year of the BCAs and I was honoured to be asked to be a judge and I'm delighted by the quality of the nominees and the winners, especially Luke Pearson's Hilda and the Midnight Giant, which I was genuinely moved by when I read it.

It was hard to 'grade' such distinctive work from all those nominated, all of it terrific in its own right but for very different reasons.

The winners were as follows:

• Hilda and the Midnight Giant by Luke Pearson (Nobrow)

In a post on their Facebook page, Blank Slate commented: "We're so proud to have taken home the first Best Book award at the British Comic Awards. Huge congratulations go out to everyone involved with the book, especially the readers and retailers who helped make Rob Davis and Woodrow Phoenix's experiment such a success."

• Tuk Tuk Issue 1 by Will Kirkby

• Bad Machinery: The Case of The Fire Inside by John Allison

The first member of the BCA's Hall of Fame is Fungus the Bogeyman and The Snowman creator Raymond Briggs.

One thing that I will publicly say as one of the judges is that several comic creators contacted me when the nominees were first announced and questioned the choices. It was noted in particular that (aside from one strip that ran in The Phoenix) there were no nominations for strips that feature in any of the remaining originated mainstream British comics such as The Dandy or 2000AD.

As someone who has promoted both "mainstream" and "independent" comics on downthetubes and elsewhere (and given the quality of work that was nominated, not only in terms of content but production values, such distinctions are by no means easy to define), I did ask about this at an early stage of the judging process.

I was told the philosophy of the Awards is to include any and all work being made by British creators, to commend the best and highlight them for a wider audience. There was no attempt to promote only "independent" comics or creators.

Suggestions for nomination was open to anyone who submitted their views on the BCA web site. The BCA Committee, comprising lecturer and artist Dan Berry, columnist and comics retailer Richard Bruton, Clark Burscough, BCA Founder Adam Cadwell, comics writer Matthew Sheret, artist and illustrator Vicky Stonebridge and ThoughtBubble founder Lisa Wood, looked at strips running in The Beano, The Dandy and 2000AD and looked for comics that stood as being some of the best work being produced in the last year.

"Jaime Smart's Desperate Dan was mentioned, as was the Judge Dredd: Day of Chaos story which got some votes from committee members," Adam Cadwell told me, "but in the end we decided that work being done in The Phoenix, online comics and some self published work stood out more and were the type of stories that could be enjoyed by anyone."

Opinions on creative work are by their very nature subjective but in my personal view, I hope that next year, British publishers large and small will again have (and take) the opportunity to send the committee their qualifying titles for consideration, as well as the BCA allowing for online nomination from visitors to the BCA web site.