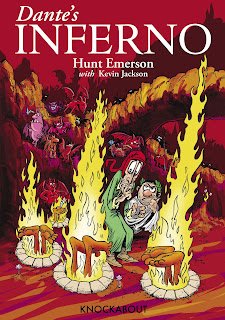 The Book: Hunt Emerson, the dazzlingly talented cartoonist, tackles the biggest literary name of them all: Dante. Emerson's Inferno delights on many levels: as an ingenious translation of classic verse; an effortlessly readable introduction to a complex poem; a delicious crib for anxious Dante students; and as a warm tribute from the master of one art form to the grand master of another.
It is a wonderful treat for anyone who already loves Dante.

The Review: Hunt Emerson has proven a dab hand at adapting works of great literature into the comics form and his talent for doing is firing on all cylinders with his version of Dante's Inferno.

It's a title, of course, that has seen its fair share of adaptation: Bloomsbury published a sumptuous comics re-telling by Seymour Chwast back in 2010, for example. But Hunt tackles the subject mnatter with such gleeful subversion that you can't help but smile at his re-telling of Dante's tale of the hapless living soul taken on an often macabre but always compelling journey through the seven circles of Hell. 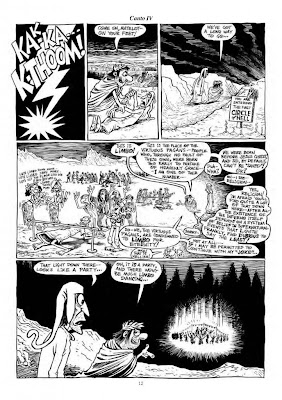 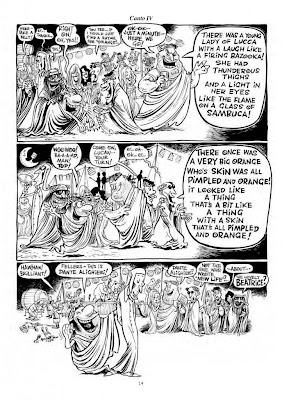 Pulling no punches when it comes to the more horrifying imagery the story conjures - but drawing them in such as way as to make them visions to (largely) smile at rather than grimace – this is an edition providing a lively and readable introduction to the poem for those too busy or too intimidated to tackle it without a guide.

There's also an essay by Kevin Jackson on Dante included in the book, which explains how the comic has been developed from the original, points out some of the more complicated jokes, and invites readers to go back to tackle Dante for themselves.

I particularly enjoyed their reasoning for omitting some of the more distasteful elements of the story. (Dante fans will know exactly which ones cartoonists would do well to avoid).

This is another terrific adaptation of a classic work of literature from Hunt: the art's fantastic, it's clever, it's witty, but at the same time it's a reverent treatment of the poem.

And what's not to like about Margaret Thatcher being used as a model for a feisty gate-guarding demon? Go on, track down a copy...