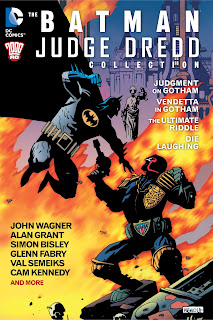 If you're a fan of those once occasional cross-company comic crossovers, then you'll be happy to hear that the epic Batman vs. Judge Dredd stories are still among the most brutal crossovers in comics, 20 years since it was first published.

Out later this month from 2000AD and DC Comics is The Batman Judge Dredd Collection, which brings together the four team-ups between the Lawman of the Future and the Dark Knight for the first time in a brand new hardback edition, with a fantastic roster of superstar talent, including Simon Bisley and Glenn Fabry.

Originally released between 1991 and 1998, these epic crossovers - Judgment on Gotham, Vendetta in Gotham, The Ultimate Riddle, and Die Laughing - brought the dynamic duo together to fight their ultimate foes. From alien super-fiend Judge Death escaping to Gotham to the Joker teaming up with the Dark Judges to cause mass slaughter in Mega-City One, The Batman Judge Dredd Collection brilliantly captures the lunacy and non-stop action of these two all-too-similar worlds from either side of the Atlantic.

Published by 2000AD in the UK and Ireland, and by DC in North America, this ultimate new edition also includes the hard-to-find meeting between Dredd and psychotic biker Lobo, and deserves a place in the collection of any self-respecting Dredd or Batman fan.

• The Batman Judge Dredd Collection is available from 27th November 2012

• Buy it from amazon.co.uk