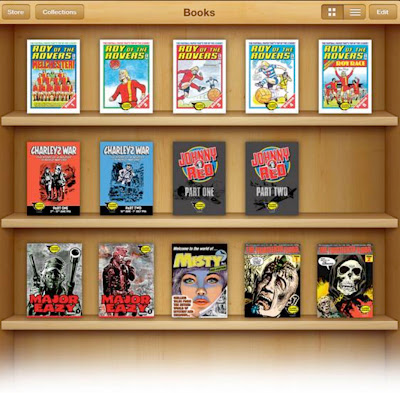 Egmont UK’s Classic Comics imprint was created to re-publish the wealth of classic comics in their archive. Four volumes of Roy the Rovers kicked off their e-comic publishing in June this year – and now they have announced the launch of further classics on popular comic series from the 1970s and 80s.

A fifth Roy of the Rovers is now available, along with strips from popular girls comic Misty and The Thirteenth Floor from the short-lived but fondly-remembered Scream.

Also joining the digital line-up soon are strips from Battle Picture Weekly, including Johnny Red, Major Eazy and the ground-breaking Charley’s War. Some of the biggest names in British comics were involved in the creation of these stories, including Pat Mills, John Wagner and Carlos Ezquerra.

Roy of the Rovers is one of the best-known and enduring British comic strips. Roy’s journey began in 1954 as a comic strip in Tiger; he became a popular fixture, so much so that in 1976 he was given his own comic, charting the highs and lows of his eventful career as a footballer. 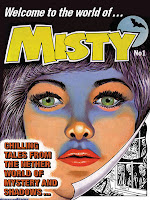 Misty’s edginess and adventurousness paved the way for a new genre of girls’ comic books. The stories were dark and mysterious, the characters flawed and morally ambiguous; upon its publication, Misty introduced readers to an imperfect world which didn’t always have a happy ending.

Battle Picture Weekly encompassed several action-packed strips that sought to invigorate the British comics scene with punchy, thrilling storylines and adventurous but believable characters. Featuring well-known strips such as Charley’s War, Johnny Red, Major Eazy and Rat Pack, it became well-known for packing a punch like no other. 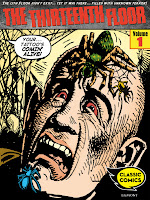 The Thirteenth Floor which first ran in Scream but transferred on that title's demise to New Eagle, is about Maxwell Tower, a unique block of apartments that was built without a 13th floor. The building is watched over by Max, a computer who has created his own 13th floor, which he uses for his own sinister practices. People who harm the tenants of the building are lured to Max’s 13th floor, and often don’t come out, causing suspicion among the authorities and trouble for Max.

David Riley, Managing Director of Egmont Publishing Group, said: “Roy, Battle, Misty…these are iconic magazines which still have a place in the national consciousness. They deserve to be brought back; their appeal also has the potential to transcend the generation gap and reach an entirely new, younger audience.

"With the limitless possibilities offered up by digital publishing, there has never been a better time to bring these comics to the fore.”

• Roy of the Rovers Volume 1 on iTunes
It's the start of the 1976-77 season and the Melchester Rovers are on great form! However, player manager Roy Race feels the pressure when a supermarket offers £30,000 to the first player to score 50 goals in the season. Can Roy show the world - and journalist Eric Eddleston - that he's playing for the team and not himself? Meanwhile, new signing Roger Dixon just can't wait to get onto the field.

• Roy of the Rovers Volume 2 on iTunes
Roy Race soon realises that new signing Roger Dixon doesn't have the stamina to last a whole match, but the players and fans want to see more of him. Things go from bad to worse when Roy starts to lose form himself, and Dixon starts competing with his own manager. Then, just as Roy cracks the Dixon problem, the Rovers come up against the toughest referee in the league, and a freak accident leaves Charie Carter short of confidence in goal! What's a player manager to do?

• Roy of the Rovers Volume 3 on iTunes
Roy manages to restore Charlie Carter's confidence, but not before he has to act as goalie himself! Roy and Penny announce that they are expecting, but the happy moment is short-lived as the Rovers are knocked out of the league cup by Swinford. In the league itself, the Rovers continue their unbeaten run and even match the all-time record. However, after being knocked out of the FA cup in a fog-affected match, can the Rovers hang on to the league's top spot?

• Roy of the Rovers Volume 4 on iTunes
The Rovers win the league and it looks like Roy has achieved the Gold Rush with the winning goal, but he reveals it was in fact Mervyn who scored the clincher to win the £30,000 prize! Penny gives birth to twins, and the comic readers get to name them! Roy's invited to America by ex-Rover Steve Mason to play some matches for the Pine City Pirates. When Roy and Blackie arrive, they find a game which is much louder and brasher than they're used to. Roy wins extra publicity for the Pirates by beating the Americans at their version of football, but will he be able to craft the Pirates into a functioning team before his final game?

• Roy of the Rovers Volume 5 on iTunes
Melchester Rovers are in high spirits following their League Championship win the previous season and Roy’s return from his summer of football in America. But the good feelings are soon overshadowed by hooliganism at the stadium. Will Roy’s suggestion to install giant screens in the stands to show highlights from the game help control the situation or cause even more trouble?

• The e-comics can be downloaded onto the iPad and Kobo. More info on the range from Egmont: www.egmont.co.uk
Posted by John Freeman at 1:08 pm