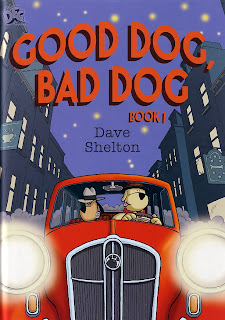 It was the first of the DFC Library books to be released and Good Dog, Bad Dog is perhaps the most complete book of the three released so far. Written and illustrated by Dave Shelton, this is a fun ride through a Hollywood gangster world inhabited by anthropomorphic dogs, and the odd cat.

Containing three different tales - Dog Meets Dog, The Golden Bone Of Alexandria and The Dog's Dinner - it sets up the situation of grizzled Detective Bergman and his enthusiastic but naive partner Detective McBoo of the the Muttropolis police department. Dog Meets Dog tells of them meeting for the first time as well as setting up the world that they inhabit before the book moves on to the more substantial Golden Bone Of Alexandria with its many film noir overtones as they attempt to relocate the antique of the title. It concludes with The Dog's Dinner which is a slightly more over the top tale of hidden identities, kidnappings and lemon cake. 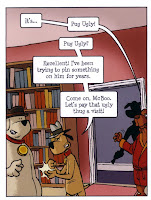 Dave Shelton shows off his love of old movies as well as some wild puns through the three stories. His choices of breeds of dogs for his characters are amusing and while the femme fatale is inevitably a French Poodle and the goons are bulldogs the "most dangerous dog in the city" looks anything but.

Of the three DFC Library books released so far this is the one that shows off best what the DFC comic was like. Unlike Spider Moon, which needs a follow-up to progress the story, or Mezolith, with its more mature themes, here is a book that will suit the adult purchaser either for themselves or their children but also can be given as a standalone present for young or old that doesn't require prior knowledge of the story or for the recipient to have to buy more to find out what happens.

Yet with its fun artwork, twisty plotlines and often groan inducing puns, while Good Dog, Bad Dog doesn't need a sequel, it certainly deserves one.

• There are more details of Good Dog, Bad Dog including sample pages on the DFC Library website.

• There is more information about Good Dog, Bad Dog on Dave Shelton's website.
Posted by Jeremy Briggs at 7:00 am