In Review: The Spider Moon 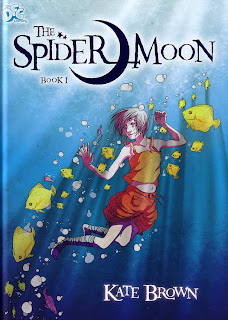 The Spider Moon is the last of the first batch of books from the new DFC Library range, written and illustrated by Kate Brown it is set in a manga styled fantasy land of islands floating not just in the ocean but also in the air.

Young Bekka Kiski lives on an island in a world who's inhabitants believe is doomed - their only hope being to escape to the island that floats in the sky. Apparently human fishermen, Bekka's people have webbed hands and bigger lungs to allow them to dive for longer underwater. When her mother is arrested by the ruling bird folk of another island, Bekka takes a canoe and travels to the other island where she is detained in the palace. There she is befriended by Prince Kaliel with whom she sneaks around the palace and listens in on what is happening to her mother. 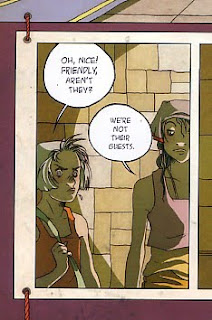 Manga artwork as a style can too often be relatively simple, concentrating on figure work to the detriment of backgrounds, but Kate Brown's artwork in Spider Moon stands out with her unusual but delightful page layouts coupled with her use of colours. Many pages have their different panels held together by rope, or cord or even chains intertwining through eyelets in the panels themselves. Other pages are broken into panels by Bekka's thoughts which are not represented by thought balloons but rather by straight white text boxes the width of the pages that pass through sections and divide the artwork as required. Her colours, particularly the layering of the colours in the underwater sequences in the first part of the story, standout. The cover gives an indication of this -- but does not show the full effect as Bekka is confronted by a whale during her diving exam. 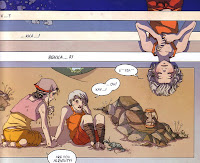 And yet it all comes to an abrupt halt at the end of part three with the dreaded "To be continued..." This is not the fault of the story which was obviously setting down for a manga-esque long run when it was curtailed by the cancellation of the DFC comic.

As if to assuage that abrupt stop, and to help create interest in the larger story, the book is the only one of the three DFC Library titles that includes extras, with a two page map of Bekka's world as well as several pages of background to that world and its main characters. There is even a page by Brown on the creation of the book's cover showing the stages she went through. So, despite the lack of a conclusion, it all adds up to an impressive package.

The Spider Moon deserves to do well to allow the story to be continued, but even if it doesn't it shows just how much of a young talent its creator is and it tantalises us not just with how Bekka's story may continue but also with what else Kate Brown may produce in the future.

• More details of The Spider Moon, including sample pages, are available on the DFC Library website

• There are more details on The Spider Moon on Kate Brown's blog
Posted by Jeremy Briggs at 7:00 am

Wow! Thanks for such a wonderful review, and for your support of the DFC Library as a whole, Jeremy! :-)