In Review: The Bellybuttons - It's Ugly Out There 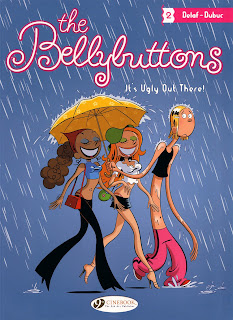 There are times when a book can take you completely by surprise and turn out to be completely different to what you were expecting. The Bellybuttons book It's Ugly Out There with its teen girl talk, high school setting, caricatured artwork and humour wasn't exactly high on my list of "that looks good" and yet...

The Bellybuttons tells of the lives and loves of three high school girls - the glamorous but conniving Vicky and Jenny and the plain and very put upon Karine. Indeed the cover of It's Ugly Out There, of Karine carrying a umbrella for the other two while she herself gets wet, rather sums up the relationship between the three. While both Vicky and Jenny try to be the most glamorous and desirable girl at school and vie for the attention of the older motorbike riding, and perpetually helmeted, John John, Karine acts as their skivvy until she finds love with the rather more sensible Dan. However as the other two realise that they are losing Karine to a boyfriend that they encouraged her to talk to in the first place, they plot to end Karine and Dan's relationship. 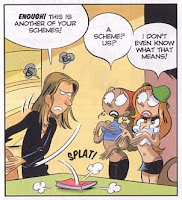 The Bellybuttons strip is actually Les Nombrils, a normally single page humour strip in Spirou magazine which began in the French-Canadian humour magazine Safirir since its creators, writer Maryse Dubuc and her husband, artist Marc Delafontaine (Delaf), are from the town of Sherbrooke in Canada's Quebec province. Since Sherbrooke has two universities, it is tempting to suggest that being surrounded by students can only help to inspire the strip's creators - and inspired the strip can be.

This is an ongoing story told in mainly one page segments with a punchline panel at the end of each which shows Karine and Dan's relationship blossom while rounding out the three main characters so much more than I would have expected. Karine's kindness to the zit-covered Murphy threatens to undermine her budding romance with Dan while, despite their queen bitch personas in school, it is difficult not to have sympathy for Vicky and Jenny when we see their often grim home lives. 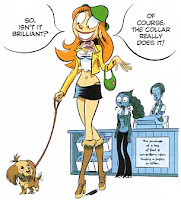 Unusually there are several times in the book when the speech balloons are left with their original French language, although translated into English in text boxes at the bottom. It is as if Cinebook decided that the joke was so French, or Quebecois, that it needed to be left in the original wording. This is not something that I have come across in other titles in their range and does seem somewhat strange in a book that, while it does not have a geographic locale, could easily be set in a generic American high school, albeit with one of the girls called Karine rather than Karen.

Cinebook classify The Bellybuttons as a 15+ title and with references to flavoured condoms and the gruesome death of Jenny's lap dog it certainly isn't for younger children but for those who enjoy Titan's reprints of Lise Myhre's goth girl Nemi, The Bellybuttons may well also hit the mark.

With its well constructed story and unusual depth to its humorous characters, The Bellybuttons - It's Ugly Out There took me by surprise. Give it a chance and you may be surprised as well.

• There are more details of The Bellybuttons on the Cinebook website.

• There are more details of Les Nombrils on the Dupuis website (in English).

• Buy Bellybutton Volume 2: It's Ugly Out There from amazon.co.uk

• Also available: Bellybuttons, The Volume 1: Who Do You Think You Are?