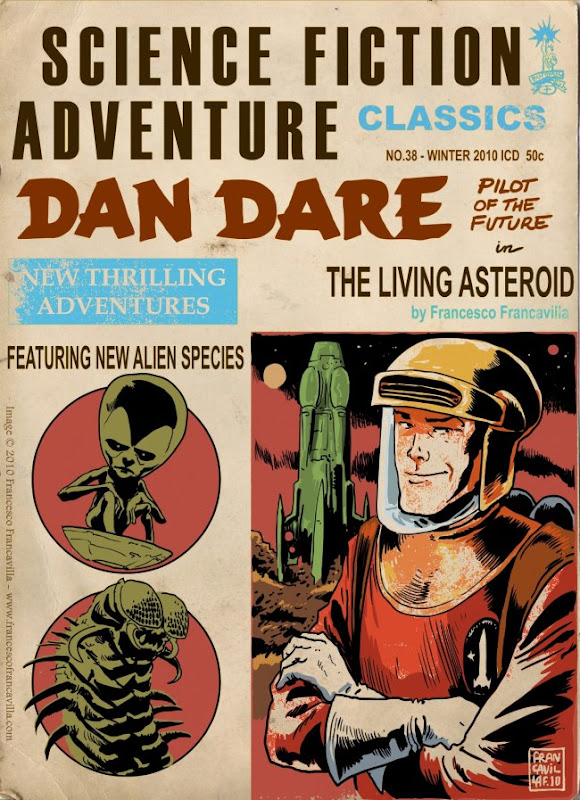 Every once in a while, the Internet throws up some gorgeous work featuring a famous character - but the origins of the art is clouded in mystery.

Given all the interest in Dan Dare recently, it was perhaps no surprise that this gorgeous 'pulp cover' featuring Frank Hampson's hero had pulses racing among his followers. Was it an unknown US publication of Dan - a find as exciting, perhaps, as the discovery of rare dummies of the original Eagle a few months back - or some new merchandise from the Dan Dare Corporation or Orion Books, who love that 'distressed' look to some of their reprint line?

Sometimes, it's hard to track down the source of a circulated image, but downthetubes got lucky with this one, and tracked down creator Francesco Francavilla, who was delighted to hear their work had attracted so much enthusiastic speculation.

"That was a 'pseudo' cover I did for fun," Francesco admits. "When not working on my sequential or illustration or cover gigs, I like to play creating cover with some of my favorite characters and trying to capture the look and feel of the period they were initially published. That generated covers like the Dan Dare or this John Carter of Mars."

When not giving Dan Dare fans palpitations, Francavilla is busy working on the third arc of Zorro for Dynamite Entertainment and is currently doing covers for their Green Hornet and Kato series, as well as working on a mini at Wildstorm. You should also check out his Black Beetle character.

Of course, if Francesco got the chance to really draw Dan Dare, he'd leap at the chance. "I would love to draw some Dan Dare space adventure," he enthuses. After this prize art, we'd love to see him do it...

• Dan Dare image reproduced here with the permission of Francesco Francavilla
Posted by John Freeman at 12:35 am