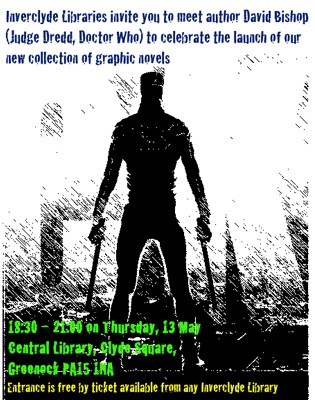 Having clocked the fact that teenagers and young adults were not using the library much, Inverclyde Libraries chose graphic novels as a way of getting that audience in. The library now has 300 titles ranging from Kick-Ass to Gemma Bovary, 300 and Robert Crumb.

Despite some dismal weather, the launch got a great turn-out (four times the audience for Ian Rankin, apparently). But the event was not a one-off. The library is also running a ten-week course on reading and writing graphic novels (already fully subscribed) and books were flying off the shelves while David was there last night.

"There was coverage in local papers beforehand, and I got interviewed for a local radio station and by STV for one of its news magazine shows," says David. "All in all, a well organised and enjoyable event. I wish other libraries would follow the example of Inverclyde Libraries. If you want to reverse an aging readership trend, you need to take action. (That applies to comics publishers, too)."

Inverclyde Council says it hopes the project will increase the use of libraries across the local authority area.

Speaking before the launch event, Jim Clocherty, the council’s regeneration convener, told The Herald: “We are keen to attract younger users into our libraries, where they can borrow books but also benefit from the wide range of services and activities we have on offer.

“The graphic fiction collection features the usual fantasy superheroes, but also includes books dealing with hard-hitting issues such as coping with cancer, epilepsy and autism.”

Here at downthetubes we think this is a terrific in initiative from Scottish libraries, and one we hope more libraries, funds permitting, will also pick up on.

In a separate development, the charity Children in Scotland will be using a comic book to encourage pupils to take part in their school councils.

The Herald reports every school in Scotland will this week receive copies of the innovative comic book that highlights the findings of Having a Say at School – the largest Scottish study of pupil councils ever undertaken, which was conducted by Children in Scotland and Edinburgh University.

• Article compiled in part with grateful assistance from David Bishop, with thanks. Read more about the event from David here
Posted by John Freeman at 10:47 am

This is so good. I've reading a lot of graphic novels these days and Campfire Graphic Novels are my all time favorites. www.campfire.co.in

Wishing you all the best. Keep us updated!