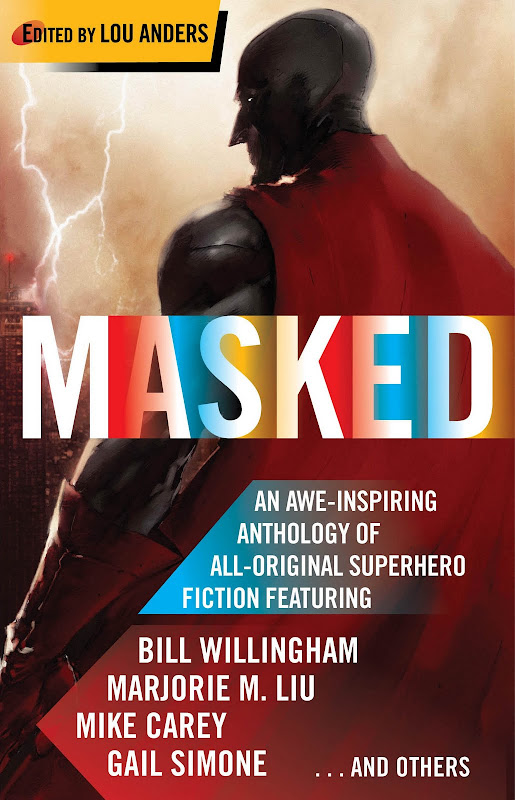 Top artist Trevor Hairsine has provided the cover to a new superhero short story anthology edited by my friend and ace SF book editor Lou Anders, who used to work for me on Star Trek Magazine and Babylon 5 Magazine.

To be published by Gallery Books, Masked

The stories in this 384 page collection are 'Cleansed and Set in Gold' by Matthew Sturges, 'Where their Worm Dieth Not' by James Maxey, 'Secret Identity' by Paul Cornell, 'The Non-Event' by Mike Carey, 'Avatar' by Mike Baron, 'Message from the Bubblegum Factory' by Daryl Gregory, 'Thug' by Gail Simone, 'Vacuum Lad' by Stephen Baxter, 'A Knight of Ghosts and Shadows' by Chris Roberson, 'Head Cases' by Peter David & Kathleen David, 'Downfall' by Joseph Mallozzi, 'By My Works You Shall Know Me' by Mark Chadbourn, 'Call Her Savage' by Marjorie M. Liu, 'Tonight we fly' by Ian McDonald and'A to Z in the Ultimate Big Company Superhero Universe (Villains Too)' by Bill Willingham.

Trevor Hairsine sprang to deserved fame as an artist on 2000AD, but has since drawn Captain America, Wisdom, Ultimate Galactus, Black Panther and many other comics.

A 2008/2007 Hugo Award nominee, 2007 Chesley Award nominee and 2006 World Fantasy Award nominee, Lou Anders is the editorial director of Prometheus Books' science fiction imprint Pyr, as well as the editor of anthologies Fast Forward 2, Sideways in Crime and more. In 2000, he served as the Executive Editor of Bookface.com, and before that he worked as the Los Angeles Liaison for Titan Publishing Group, writing a huge number of brilliant articles for me on STM and other Titan Magazines, as well as authoring The Making of Star Trek: First Contact.

Due for release in July, Masked looks to be another great collection from an editor who's a dab hand at assembling great anthologies (but never let him try and make you drink grass).