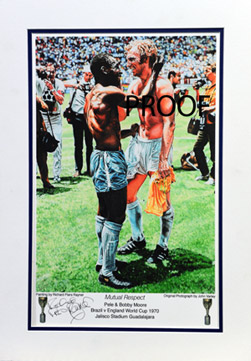 Former Doctor Who comic artist Richard Piers Rayner has produced a limited edition print recreating one of football's most iconic moments, when Pele and Bobby Moore were pictured swapping shirts.

The original photograph, taken by John Varley at the Estadio Jalisco Stadium in Guadalajara, Mexico, on June 7 1970, shows the players together after England's Group C defeat to Brazil.

The then world champions were effectively handing over the baton of world supremacy to the champions-elect and the world's greatest-ever player.

Stockton-born Richard, who these days is artist in residence at Middlesbrough Football Club, contributed the stunning six part tale Evening's Empire to the Doctor Who mythos in the 1990s (also set in Middlesbrough and written by TV series script editor Andrew Cartmel), but is probably best known to comics fans for his work on the graphic novel Road To Perdition, which inspired the Hollywood blockbuster starring screen legends Tom Hanks and Paul Newman.

Richard has worked with "Boro" for a number of years, producing a wide range of artwork representing historic and contemporary events at the club. Chosen from a host of quality applicants for the post, which allows him to get close to the matchday action, his drawings have become a popular feature in the club programme over recent years and several line the main stairway of the Riverside Stadium as part of the club's Artist in Residence project.

"I loved the rare and irresistible opportunity to recreate one of sports defining images," says Richard of this commission, now on sale as a limited edition print from YPF Publishing.

"In a brief moment at the end of the game opponents acknowledge the sportsmanship of their contest. There is no better reason to call it the Beautiful Game and no better challenge than to bring all that colour and drama back to life."

• Limited edition signed and numbered prints (measuring 33cm x 44cm) of the painting, titled 'Mutual Respect', are available for £175, including courier dispatch and first-class packing. These prints are not framed but come fully mounted and ready for framing on high quality art paper. A black-wooded framed version is available for £225 (inclusive of delivery).


• Visit www.yfppublishing.com for more details.
Posted by John Freeman at 11:55 am