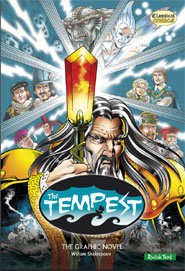 Classical Comics adaptation of Shakespeare's The Tempest has been shortlisted for two different awards.

In June, the company will find out if it wins the Association of Educational Publishers Award for its adaptation of Shakespeare's legendary fantasy romance, realized by writer John McDonald with art from Jon Haward (pencils) and Gary Erskine (inks), with colouring by Nigel Dobbyn.

It's exciting weeks ahead," Jon told downthetubes. "This is all good news for Classical Comics -- but also for UK publishing."

The "IPPY" Awards, launched in 1996, are designed to bring increased recognition to the deserving but often unsung titles published by independent authors and publishers. Established as the first awards program open exclusively to independents, over 2,000 "IPPYs" have been awarded to authors and publishers around the world. The Awards recognize 12 Outstanding Books of the Year in categories such as Most Inspirational to Youth and Most Likely To Save the Planet, and to gold, silver and gold medal winners in 67 categories, ranging from non-fiction categories like Architecture and Religion, to fiction categories like Multicultural and Horror.

"This year we saw spectacular work in so many categories – so much creativity, so much passion -- so much truth," say the organisers. "It is this dedication to truth and the art of literature that makes these awards worthwhile and inspires us to delve into the massive task of judging each year."

The Tempest is up against Ars Memoria: The Art of Memory by Menton J. Matthews III (Prudentius Publishing), The Vampire Conspiracy by Marc Morgenstern and Adam Gorham (Five Strangers Press) and Hatter M: Mad With Wonder by Frank Beddor (Automatic Pictures).

Classical Comics won a bronze IPPY and a British Book Design and Production award last year for its adaptation of Macbeth.

In the AEP Awards, another Classical Comics title, Romeo and Juliet

(also adapted by John McDonald with art by Will Volley and colouring by Jim Devlin), is also being considered along with a number of other titles in the 'Reading and Language Arts' category

Although The Tempest was the first play to appear in the first official Folio printing of Shakespeare's plays, it was almost certainly the last play he wrote. It held pride of place in that first collection, presumably because the editors thought it to be his masterpiece; a crowning glory to the career of the most brightest of playwrights.

"Needless to say, we had to select the very best artists to do it justice, and to bring you the stunning artwork that you've come to expect from our titles," says publisher Clive Bryant. "This book is a classic amongst classics."

• Association of Educational Publishers Award
Posted by John Freeman at 9:18 am