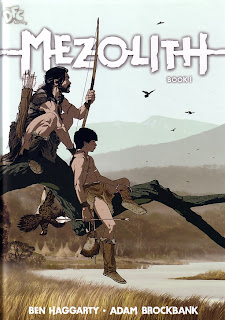 The DFC, the subscription-only anthology comic that ran for some 10 months in 2008 and early 2009, was always seen as a breeding ground for graphic novel compilations of its stories and so it's good to see the comic tales now beginning to be published in full colour A4 size hardback books. The first tranche of these span the humour of Good Dog, Bad Dog, the manga of The Spider-Moon and the pre-historic adventure of Mezolith.

Set 10,000 years ago in what will eventually become the east coast of Britain, Mezolith tells the stone age tales of a young boy, Poika, and the members of his tribe, the Kansa. As they go about their hunter-gatherer lives, the seven stories in the book show the dangers that they face from the animals they hunt and from the neighbouring tribe, as well as relating some of the superstitions of the tribe.

From Poika's near death experience on a hunt at the beginning of the book, via his healing aided by the local medicine woman, to several dangerous run-ins with the leader of the Owl tribe, the book's continuity between its stories is tight and it helps bind together the world that writer Ben Haggarty has created. Adam Brockbank's artwork is impressive in its detail and the fluidity of its action sequences, as perhaps befits art from a film storyboard artist. His panels are both as beautiful and as horrific as the different stories require them to be.

Yet it is that juxtaposition between the beauty and the gore that makes the book somewhat of a contradiction. The back cover blurb describes it as "Stone-age horror from the DFC Library" and while the initial gory attack of the wild bull on Poika isn't particularly horrific, it is the hallucinatory dreams that he has while recovering, involving a giant blue human baby, that start the more gruesome sections of the stories. It is hard to reconcile that the torture of Poika's father by the Owl people, which includes the amputation of one of his hands, was in the same comic as, for instance, Sarah McIntyre's sweet Vern and Lettuce. 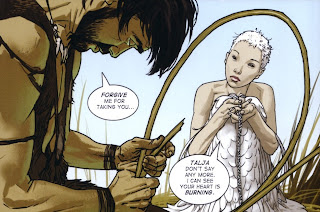 Yet despite the real life dangers that the tribe face, the best story of the book is the fantastical Swan Bride in which one of the members of the tribe journeys to a far off land to retrieve the shape changing swan woman that he has fallen in love with. While this also has its gory moment, it stands out as being completely different to the rest of the book with its supernatural creatures appearing to be part of the real world and its message of love triumphant. Swan Bride is the one story in this compilation that you will go back and read again.


Mezolith is a more mature book than I would have expected to see coming out of the DFC. So while I enjoyed it and would look forward to seeing more of the tales of Poika and his tribe, I won't be buying a copy for my eight-year-old nephew. Not yet, anyway.


• More details of Mezolith and the rest of the DFC Library, including sample pages are available on the DFC Library website
Posted by Jeremy Briggs at 6:21 pm

I hope the DFC books are very successful. They're certainly quality material.

Much as I like anthology comics, I thought the mix in The DFC was incongruous, such as your example of Mezolith and Vern & Lettuce being in the same comic. If they'd been tv shows one wouldn't expect such tonally different material aimed at different ages to be in a compilation DVD, so why did they think it'd work in a weekly comic?

Anyway, that was the past. Hopefully the books can stand alone and find their individual audiences and head towards a brighter future.

I discovered Mezolith in its hard back format not in the anthology comic that seems to have caused much polemic discussion on the web.

As a stand alone graphic novel it is beautiful, engaging and wonderfully dark. The stories are captivating, full of danger and adventure, and the artwork is subline, capturing motion myth and emotion perfectly.

This is reminiscent of early Gaiman in its tone and balance between the real and the mythic worlds. Stunning stuff.

I recommend it highly for adults and children over a certain age (for each parent to decide). A must for my shelf, and the shelves of my friends.