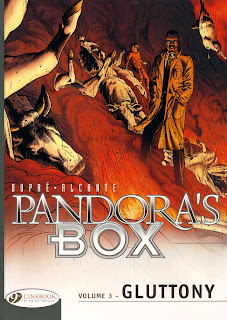 The third of the Pandora's Box series of individual but themed stories based on the seven deadly sins, it was inevitable that Gluttony would concentrate on food. The book takes the BSE and vCJD scares of recent years and sets the story in contemporary France.

Teze Egee is in charge of the French food safety agency and was given the post by the French minister for health who also happens to be his father. With the agency knowing that there is a new strain of BSE in the country's cattle, Teze struggles to determine the initial location of the outbreak, imposing movement restrictions and culls on the French herds. With government ministers horrified at the potential human death toll, Teze seems no closer to discovering how that first herd originally became contaminated until he makes a chance discovery that strikes very close to home. 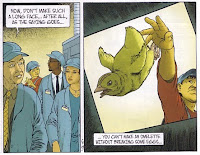 The previous Pandora's Box book, Sloth, was less than successful in its execution but Gluttony is a big improvement with Alcante's plot considerably more interesting and, while preachy at times about factory farming methods, it suits the theme better than the anti-drugs message in Sloth. Stephen Dupre's artwork is a big improvement on Radovanovic's in Sloth with the factory farming sequences being particularly striking. 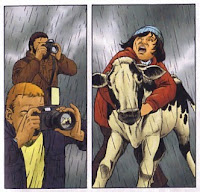 Perhaps some of the plot points in the story are a little too familiar to those that remember the British BSE outbreak - massive funeral pyres of cow carcasses, ministers feeding meat to their children in front of the media, and that same media taking up the case of a child's pet cow condemned to die - but it doesn't distract from the growing unease in the book about just how the outbreak began.

Alcante mixes Greek myth into the Pandora's Box series and with Gluttony it is the myth of the Minotaur trapped in the labyrinth. Unlike Sloth in which the Trojan War references were obvious, Gluttony is much more subtle and it is only with the story's resolution that the use of the Minotaur myth becomes a little more apparent.

Pandora's Box - Gluttony was never going to be an uplifting story but it is a mature and thoughtful one that raises expectations for the five remaining books in the series.

There are more details of the English language Pandora's Box series on the Cinebook website.

There are more details of the original French publications of Pandora's Box on the Dupuis website.
Posted by Jeremy Briggs at 7:00 am