In Review: Cinebook Recounts The Battle Of Britain 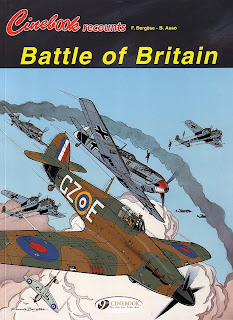 If you are looking at the cover of Cinebook Recounts The Battle Of Britain thinking that it looks a little familiar that is because this is the third time that it has been published in the UK. The first time was by Red Fox in 1995 while Cinebook themselves published it in 2008 - but in 1995 it was entitled Biggles And The Battle Of Britain while in 2008 it was Biggles Recounts The Battle Of Britain. With there being an issue between the original French publishers and the WE Johns estate over the character of Biggles, we should probably consider ourselves lucky that, since he is not actually a character in the story, it was relatively easy to retitle the book and avoid the issue.

First and foremost this is a history book, which relates the events of that summer 70 years ago when the Luftwaffe attempted to wrestle air superiority of the southern English skies from the Royal Air Force to allow an invasion fleet to sail from German occupied France. They were unsuccessful and Hitler moved on to open up a second front against the Russians instead.

Written by Bernard Asso and illustrated by Francis Bergese, the book relates the story of the battle in 22 pages which is then followed by 20 pages entitled The Bombing Of Germany (1943 - 1945). Asso tells the story briefly but succinctly including many of the characters from both the British and German sides to humanise the story although in translation from French to English Air Vice Marshal Leigh-Mallory looses part of his rank which also happens to German Grand Admiral Raeder who's surname is also mis-spelt. 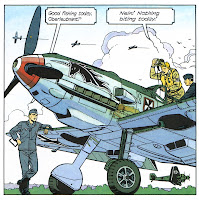 Unfortunately, it is not the only issue since the problems begin right in the first panel in which we are told that the British Expeditionary Corps were evacuated from Dunkirk - it was the British Expeditionary Force. This tends to show that the original French version has been translated too literally into English without checking the correct British terms so, for instance, the twin engined Messerschmidt Bf110 fighters are described as "bi-motor".

For a fictional story the odd instance of this can be forgiven: however, in a factual book such terms should be correct and all too often in the Battle of Britain story they are not. The other mistake in that first panel is one that Cinebook have made before in Biggles - Spitfire Parade, referring to the British World War 2 military who fought for King George VI as 'her majesty's forces'. The lack of knowledge of RAF terms also seen in Spitfire Parade is also evident here, with inaccuracies as to how squadrons and groups are numbered.

As with Spitfire Parade, this book really needed a proof reader familiar with the subject.

The second half of the book is given over to the allied bombing campaign in Europe in the later stages of the war. This does not suffer in translation the same way as the Battle Of Britain section does, perhaps because it has fewer specific terms in the text, but it does get the Cinebook censorship treatment on the "good girl" art that adorned the aircraft. Strangely, this is a little inconsistent with the female figures only being removed in close shots while if the same aircraft is smaller in the next panel the figure remains.

Yet for all these issues Bergese's artwork remains a delight. His aircraft are accurate and detailed, even down to the mud splatters from the Hurricane tail wheels appearing on their rear fuselages, and he is as good at illustrating bombers as he is with fighters, be they German, British or American.

This is a reissue of one of the earliest Cinebook publications, which may explain away a little of the dodgy translation but for those into their aircraft then it must be bought to see Bergese's excellent artwork.

• There are more details of the original French Biggles Raconte series on the International Biggles Association website.
Posted by Jeremy Briggs at 7:00 am