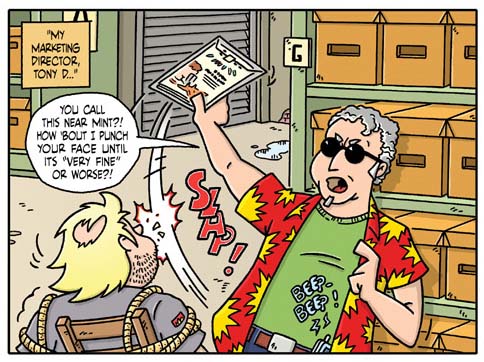 Preston-based comics artist Dave Windett - whose credits include work on a variety of animated characters from Fox and Warner Bros. and his illustrations for the Norwegian book series, Magic - has joined the Comic Book Mafia.

Lest you think mild-mannered Dave has taken to threatening editors with a machine gun pulled from a portfolio case, we hasten to add we mean the webcomic project, The Comic Book Mafia, part of a number of projects featured on the Webcomic Factory, the brainchild of creators Christian Beranek and Tony DiGerolamo.

Both creators Christian and Tony have worked in print comics for many years. An early advocate of webcomics, Tony convinced his friend Christian that webcomics were the way of the future and have created a webcomic “hub” of high quality comics from a variety of artists, most creations of Christian and Tony.

The Comic Book Mafia centres on characters CB and Tony D, who would like to invite you to the offices of Lead Pipe Studios where they conduct perfectly legitimate comic book business. Get a behind-the-scenes look at how CB and Tony D make very legal comic books and never beat up comic book store owners, abuse fans or make satirical jabs at the comic book industry.

The first episode is live now, and for comic creators, we can see this becoming something of a regular bookmark to return to - just in case they get featured, perhaps. With Dave a regular attendee at many British comic conventions, we're sure he has plenty of potential reference!

Remember, there is no such thing as the Comic Book Mafia...

Initial strips featuring on the Factory include Post Apocalyptic Nick (Can a man who knows nothing about survival survive without his iPhone, Chinese Take Out and Cable TV?), The Gentlemen’s Club (Welcome to Boobopolis, a typical sleazy strip joint off the New Jersey Turnpike); and Japanese School Girls in Love (Saving the Universe right after class).

• Check out at the WebComic Fatory at: www.thewebcomicfactory.com
Posted by John Freeman at 10:25 am