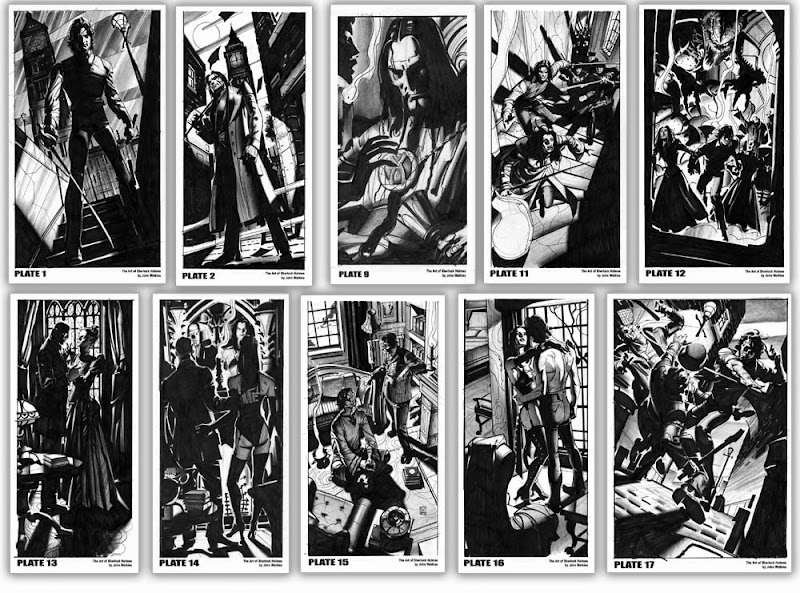 Dez Skinn's Quality Communications is offering a limited edition collection of movie concept art by comics creator John Watkiss he did for a proposed Sherlock Holmes movie via eBay.

"One member of our funnybook community whose quality of work far exceeds his profile is John Watkiss," says Dez. "I first knew his classical linework in Acme's old Ring of Roses, written by Das Petrou and reprinted by Dark Horse (and now in pre-production as a Hollywood movie).

"No stranger to film, John spent 15 years working in tinseltown for Disney (and has a some seriously scary stories about such). He's back in Blighty now, and working on a Robert E Howard production. But his last major work was as concept artist for fellow Brit Lionel Wigram, a film producer who had the hots on for making a young Sherlock movie. John produced 18 pieces of concept art which Wigram used to sell the idea."

Dez is offering a unique behind-the-scenes limited edition of the art, offered exclusively on eBay, revealing how the movie would look long before Ritchie, Law or Robert Downey Jr were involved.

On offer are limited edition prints of 18 pen and ink drawings which made the movie happen. Each plate is reproduced on high quality 240gsm glossy card, measuring 11.75 x 8.25", and suitable for framing. This portfolio comes with an annotations page, detailing both the history of the film and descriptions of each print, written by Dez.

Produced by Quality Communications, this is a strictly limited edition of 500 sets, with each top plate signed by the artist and numbered.

• Check the portfolio out here on eBay

• Check out the Quality Communications store on eBay - lots of British Comics goodies!
Posted by John Freeman at 12:05 pm