Garry Leach, Rian Hughes, Dez Skinn, Gary Erskine, Emma Vieceli and Simon Furman are just some of the comic creators who will be appearing at this year's SCI-FI-LONDON event on Saturday 1st May.

At last year’s SCI-FI-LONDON (www.sci-fi-london.com) the organisers added the notion of Sci-Fi Labs to the festival line-up: panel discussions which mixed artists, writers, scientists and cultural commentators to explore various SF themed topics. This format and a screening of Hardware introduced comic book creators such as Kevin O’Neill, Bryan Talbot, Paul Cornell, Daniel Merlin Goodbrey and Paul Duffiel to SCI-FI-LONDON in 2009 and this year's event sees an increase in the number of events featuring top British graphic novelists which are sure to interest downthetubes readers.

Now in its ninth year, SCI-FI-LONDON is the UK's only dedicated Sci-Fi and Fantasy film festival, screening world and UK film premieres, documentaries and a selection of classic SF titles. SCI-FI-LONDON also has a strong international shorts programme and screens a short film with every feature screening. It also holds a film school and filmmaking competitions to encourage more science fiction films to be made in the UK.

This year's comic-related events are as follows: 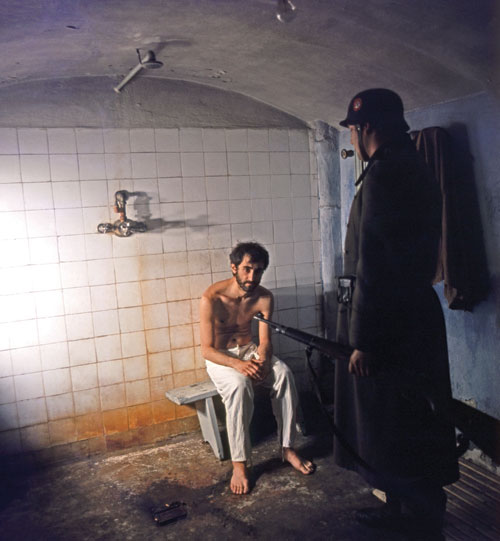 Set in 1943, this film is based on Stanislaw Lem’s first novel, and chronicles the experiences of a young doctor starting out in a mental hospital. But who is more crazy here the patients or the doctors? Semi-autobiographical, the controversial nature of the story led to the book being suppressed by the authorities in the 1950s.


Introduction and Q&A with Andrzej Klimowski, a world-renowned film poster designer and graphic novelist. In the UK, his visual style proved too controversial when his poster for Luis Buñuel’s The Phantom of Liberty was banned by the London Underground. As a writer and artist, he has authored three graphic novels, The Secret, The Depository and Horace Dorlan. With his wife, Danusia Schebal he has adapted Dr. Jeckyll and Mr. Hyde and The Master and Margarita to comic book format. Andrzej and Danusia were active participants in the Warsaw film scene in the late 1970s and Professor Klimowski chose The Hospital Of Transfiguration from our ‘Focus on Poland’ to introduce, as an example of how genre films from that period stand up today.


Although there have been notable and successful female comic book creators on both sides of the Atlantic over the last half century, it is the translation of Japanese Manga in the West that has seen considerably more female comics creators join the medium in recent years. This is possibly a combination of Manga having a greater female appeal than traditional Western comics and original Japanese Manga being already created by women in Japan.

To discuss these issues SCI-FI-LONDON have a trio of up and coming UK Manga creators:


• Emma Vieceli is contributing to the comic strip adaptations of the songs of Tori Amos, Comic Book Tattoo and continues to draw an online Manga story, Dragon Heir.

Chair: Judith Lewis, one of the founders of Geek Girl Dinners is a veteran of anime conventions and has hosted Shinnenkai events

This is a free event for women only. Men are allowed as guests of a LGGD member. To get your tickets register at http://scifi-london.eventbrite.com


Celebrating the continuing popularity of the iconic British Space Hero whose first appearance in the Eagle was published in April 1950, Sci-Fi London presents a quartet of artists who have created new adventures for the lantern jawed pilot in more recent years. Panellists include:

• Garry Leach drew Dan’s return to print in 2000AD for two stories: "The Doomsday Machine" and "Visco", ten years after the end of the original Eagle in the late 1970s and more recently covers for Virgin comics’ revival of the ‘Pilot of the future’ in 2008.

• Rian Hughes drew the Eagle-inspired comic The Science Service in 1989 and then the Mekon’s final revenge in the Thatcherite satire Dare, written by Grant Morrison, in the adult comics Revolver and Crisis a year later.

• John Freeman is a comics historian and writer, webmaster of downthetubes and the current editor of Titan Books Dan Dare collections. He previous wrote The Science Service and now writes the strip Ex Astris in the Dan Dare-inspired magazine Spaceship Away.


Inspired by Manga? Want to make a comic of your own? You can do it in just a couple of hours - and you don’t have to draw a line unless you want to! Come and try out comic-making hints, tips and techniques that work for any kind of artist and any style of art. Letraset has provided all the materials, Helen McCarthy provides the method and oils the wheels of your genius if you get stuck, and you bring whatever’s in your head for inspiration. Solo artists/writers, duos and small circles welcome.


With Marvel comic book heroes such as Iron Man and Spider-Man more popular than ever, we look at home-grown additions to the Marvel Universe. Marvel UK was founded in the early 1970s as a British affiliate to the US company, but in 1976 they added original material to their newsagent reprints, starting with Captain Britain and a new pantheon of popular characters over the next three decades. Panellists include:

• Dez Skinn is a pioneering Marvel UK editor who launched titles such as Hulk Comic and Doctor Who Weekly, which featured early work by Alan Moore, David Lloyd, Pat Mills and Dave Gibbons.

• Dan Abnett gave Captain Britain a darker spin in the 1990s by adding him to a new team of heroes with:

• John Freeman was editor on many of Marvel UK’s early 1990s titles such as weekly comic Overkill, Death’s Head II, Warheads, Killpower and Motormouth, contributing strips to several issues, and was one of the longest-serving editors on the award-winning Doctor Who Magazine.

• Simon Furman was the primary writer for Marvel’s Transformers, a dozen issues of Doctor Who Magazine and creator of Marvel UK’s most memorable SF titles including Dragon Claws and the original Death’s Head.


The publishing industry is coming under assault from all sides. Are Kindles, iPads and smartphones signalling the end of traditional paper publishing? Customers no longer believe publishers can justify the prices they charge, not just for books, newspapers, magazines and periodicals are also suffering. How will the publishing industry re-shape itself for 2050? Will Apple and Google become the new big publishing houses? And if ubiquitous digital delivery means anyone can be a publisher, will we even need the big guns anymore?

• Paul Rainey is a cartoonist, illustrator and creator of diary-comic-strip-in-list-form Book of Lists. He is currently serialising his graphic novel, or ‘thick comic book’, There’s No Time Like The Present.

• Mark Charan-Newton is a Blogger, Tweeter and author of debut novel Nights of Villjamur, one of the most critically acclaimed fantasy works of 2009.

• Dave Bradley is Editor-in-Chief of SFX magazine, Europe’s best-selling sci-fi and fantasy title and a fan of all forms of science fiction and fantasy.


While the cinema seems to be obsessed with comic book adaptations in recent years, this panel looks at the more general phenomenon of the dialogue between comics and film as comic book creators help design movies and draw storyboards for moving pictures and in turn, film has started to dictate the format of modern comics. Panellists include:

• Woodrow Phoenix started off as a small press comic book creator in the vibrant British scene of the 1980s before becoming a popular kids illustrator that lead to such unlikely collaborations as with Mark (Kick-Ass) Millar on Sonic the Comic and lettering Alan Moore's A Small Killing. More recently he has seen his comic Pants Ant turned into an animated pilot by The Cartoon Network and produced the acclaimed graphic novel Rumble Strip which was influenced by film noir and road movies.

• Howard Webster is an award-winning photographer who has combined film and sequential art in the web comic. The Many Worlds of Jonas Moore, which combines comic book art with both images and action movie sequences starring Colin Salmon.

• Cyriak Harris is one of the hottest viral animation creators in the UK and an ident designer for E4. He comes from a background drawing underground comics and sees a direct link with the creation of his CGI cartoons.

• With the exception of the MANGA MASHUP event, all events and screenings take place at the Apollo Piccadilly Cinema, 19 Lower Regent Street, London, SW1Y 4LR.