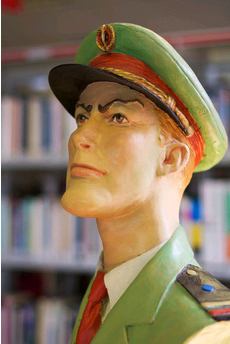 Southport College - where Dan Dare co-creator Frank Hampson studied art - is hosting to a Dan Dare exhibtion celebrating 60 years of Eagle until the end of the month.

"When you enter Southport College’s Library Learning Centre you may notice two figures perched on high behind the reception counter," says the College’s Library Learning Centre Officer, Sammantha Browne in a web post. "Dan Dare and his arch-enemy the Mekon turn sixty this year. Internationally famous, they are the ‘founding members’ of several appreciation societies across the globe.

"Dan Dare was the brain child of Frank Hampson, who enrolled at Southport College in 1947 for a course on illustration. But he was not the fresh-faced teenager you might suppose. 29 and married with a son, Frank had witnessed at first hand the ravages of war, seeing active service in Dunkirk and Normandy. He joined the Royal Army Service Corps and rose to the rank of a junior officer, but he always wanted to be a pilot with the RAF. Some may say he achieved this vicariously through his creation of Dan Dare."

The exhibition, which opened today on the the 60th anniversary of the launch of Eagle comic, details Frank Hampson’s biography, including his time at the College, the history of Eagle, its Southport connections and the legacy of Dan Dare. Members of the Eagle Society were on hand to mark the exhibit's opening.

Sam asks that if readers have any fond memories you would like to share of Dan Dare, the Mekon or Eagle comic, please email her at library@southport.ac.uk and she will pin up your messages for others to enjoy.

• Lancashire Magazine: Future Perfect
Sixty years ago the genius of two men turned the seaside town of Southport into the centre of the universe. Mark Gorton explains how and why.