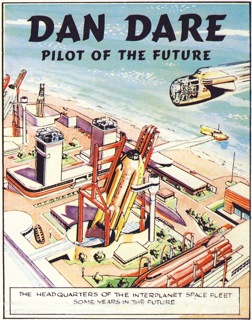 The famous cover of Eagle Issue 1 is well known to comic fans everywhere, but what lay inside for the 1950s boy?

As we celebrate 60 years of Eagle today, Richard Sheaf steps back to this week in 1950 to find out what readers found in this brand-new comic...


Like the proverbial curate’s egg Eagle Issue 1 is good in parts. Your 3d got you 20 pages of comic, of which eight were in beautiful photogravure colour but the stories and artwork were of 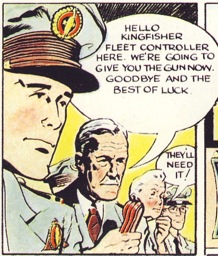 a variable quality. Take just the front page: the first frame of Dan Dare is a masterpiece of design, colour and layout - but the third frame is about as lifeless as can be. Like the rest of "the new national strip cartoon weekly", it was still finding its feet.

Turning over the front page, we get to the first black and white page and the spot in Eagle that BBC Radio's PC49 would make his own for a decade.

His adventures are already being scripted by Alan Stranks (as they were on the wireless) but the artist is not John Worsley, who ultimately made the strip his own - in fact it’s Strom Gould (who would also later draw the Storm Nelson strip, before handing it over to its more famous illustrator, Richard Jennings) and follows the story of Police Constable Archibald Berkeley-Willoughby as he patrols his beat in London.

Having a strip which readers would have heard of was presumably a sort of insurance against the unknown quantity that the rest of the comic presented. For anyone familiar with John Worsley’s densely packed strips - an example features below - which almost smelled of London, this looser, bigger, blander version of PC49 can come as a shock. Another example then of a strip finding its feet. 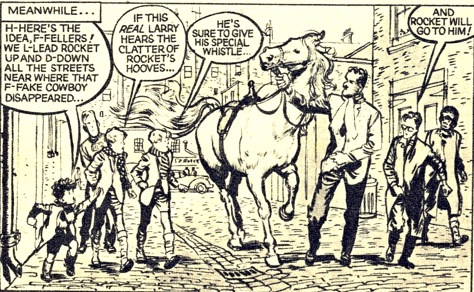 Pages 4 and 5 are mainly taken up with that boys comic stalwart (at least up until then) the text story. This one is called “Plot Against the World” as was written Chad Varah (who would later find worldwide acclaim as the founder of the Samaritans organisation, but who at this point was simply a colleague of editor Marcus Morris).

Also nestling at the foot of Page 5 was the very first instalment of Captain Pugwash.

While Frank Hampson would famously lose the copyright to his most famous creation, Dan Dare, somehow John Ryan would hold onto his copyright to Pugwash. He also spent many years drawing the adventures of Harris Tweed for Eagle but began with Pugwash (an introduction to editor Marcus Morris had been a wedding present to Ryan from a friend) and, indeed, Mrs Pugwash too.

The character is a long way from looking like the jovial, avuncular figure that would be recognisable to millions once he debuted on BBC TV in 1957 (having also featured in a comic strip for the Radio Times). At this stage, instead he looks like a rather sallow character with a rather impressive Zapata moustache to go with his stubble.

Turning the page we have half a page of cricket coaching tips from Leary Constantine ("This week – the stance") and a full page article on "The Spies who Saved London" by Bernard Newman and then a whole page on how radar works from Professor Brittain – so the educational ethos of Eagle was established from early on, even if Professor Brittain would normally only get half a page to himself in future. 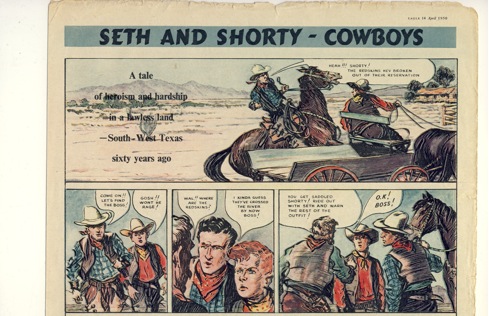 Heading towards the centre pages now, on the page that Jeff Arnold and the other ‘Riders of the Range’ would occupy magnificently for so many years. However, before Jeff Arnold there were Seth and Shorty – cowboys. And that would be where the similarities between the two strips would end. Seth and Shorty was one of the worst strips published in Eagle, as the opening panels above reveal, complete with classic lines such as:

Frame 1 - Man 1 (Seth even though he is addressed as Wal in frame 3) “The redskins hev broken out of their reservation”
Frame 2 - Man 1 again “Come on!! Let’s find the boss”
Man 2 (presumably Shorty but who knows) “Gosh!! Won’t he rage!”

And the strip finishes with the line “Doggone! Sure this range is gonna hum!”

There is a certain car-crash awfulness to this that means you can’t take your eyes off it, even though it’s just terrible.

Into the centre pages now and there is a glorious Leslie Ashwell Wood cutaway drawing of the new gas turbine – electric locomotive, setting the standard for years to come. Underneath that is the strip Skippy the Kangaroo by Danet, Dubisay and Genestre which sounds like a French reprint strip. It too is terrible, and was replaced by Tintin (his first appearance in English) and then, latterly by Luck of the Legion.

Over the page and there two more (half page) education features – "Heroes of the Clouds" by Kenneth McDonagh and "Discovering the Countryside" by John Dyke (this week: the hedgehog). More half page features on the next two pages – Real Life mysteries, making your own model racing car and Sporting personalities (this week: Stan Mortensen). Educational features come thick and fast here but they definitely feel like padding – so perhaps it was no surprise that Eagle soon dropped from 20 pages down to 16 pages a week.

The Eagle Club and editor’s page was then followed by another text strip, this time entitled “Lash Lonergan’s Quest” it was written by Moore Raymond and was set in the Wild West.

On the inside back page, Frank Hampson draws his third page of the issue with Rob Conway (the strip had been called Secret City in the dummy versions that Frank Hampson and Marcus Morris had put together) and rather than being the “RAF in space strip” (Dan Dare) is instead the “young RAF in England” strip in the shape of the air training corps. Again, some of the frames are brilliant – just look at how much work has gone into the engine behind the cadet on the right hand side of the opening frame, above - but some of it is very flat and incredibly lifeless.

That, of course, might have something to do with the volume of work that Hampson was putting into the issue, the inside back page was also by him -- an advertising strip for Walls ice cream and featured the adventures of Tommy Walls, the lad who has adventures but always, somewhere long the way, time for a tub/cornet/slab of walls ice cream. The early stories are all standalone stories and featured Tommy gaining superhuman powers from his ice cream...

Later strips would feature longer strips and the ice cream as a treat / reward rather than the equivalent of the magic potion in Asterix.

The back page featured the first of Eagle’s famed adaptations of real lives – usually adventurous lives, sometimes religious and taken from anytime in history. It all began here with the life of St Paul (although initially he is plain Saul of Tarsus before his conversion of the road to Damascus).

So, all in all then, all the right ingredients are there to make Eagle a great success over the next decade – Dan Dare, the police strip, the western strip, the educational features, the cutaway drawing and the real life back page strip – they just needed some time to settle in and become the Eagle that people would think of as being the classic 1950s comic that is remembered - especially today - so fondly...

I just LOVED the Seth and Shorty strip when I was a little girl-- it was my favourite, and the thought of it still gives me a frisson of nostalgia. I remember soft blue-and-purple distances across the prairie and the two riders approaching, heroic and significant as I longed to be. Weird to see it trashed here. Good to be reminded, though, of all the other familiar features.