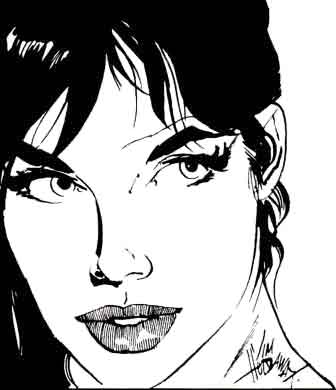 Born in 1920 in Lewisham, Peter, who began writing professionally at 16, is, of course, most famous for his wonderful Modesty Blaise strips and books, but he also wrote newspaper strips such as Romeo Brown and the best of the Garth stories.

In a three-part article about O'Donnell, Kristy Valenti notes O'Donnell's body of work, featuring bold and capable heroines — primarily in the genres of spy thriller and gothic romance, and in the forms of comic strips, short stories and novels — has had millions of readers. Quinten Tarantino counts among O'Donnell's fans, but his most loyal audience is women and, especially and to this day, girls.

"As such, it makes a curious sense that the catalyst for his greatest creation, the criminal-turned-spy Modesty Blaise, was a girl," says Valenti. "In 1942, among the refugees fleeing from German troops through the mountains bordering Iran, was 'a little girl no more than seven.'Posted nearby was a unit of the Royal Corps of Signals, of which O'Donnell was a member.

"The war ended, and O'Donnell freelanced on projects like writing serials for women's magazines and a few comic strips — Garth, Tug Transom and Romeo Brown — for the next 21 years, while carrying with him a mental image of this child, who became a symbol for a 'tough survivor.'"

After a first failed attempt with Dan Dare artist Frank Hampson, O'Donnell paired with his Romeo Brown collaborator Jim Holdaway — and unleashed Modesty Blaise as a daily comic strip in the pages of the The Evening Standard on 13th May 1963. The strips are currently being collected by Titan Books

, with the latest volume, Modesty Blaise: Death in Slow Motion

The official web site for Modesty Blaise offers Peter's best advice for aspiring writers. "In 1948, I was working freelance and, amongst other things, was writing two, 3,000 word stories a week for Film Fun," he recalls.

"I would give him the general plot of each of the stories, he would OK them and go back to his paper. I would then write one of the stories during the rest of that day, the other one on Friday and deliver both to him by Friday evening.

"On one occasion, I had been very distracted. My wife was giving birth to our second daughter by caesarean section, not a common occurrence in those days, and I was very worried about her. On that Thursday, when I went into his office I had no ideas in my head. I told him I had been very distracted due to personal circumstances and said that I really needed a little bit of help. I asked if we could go around a few ideas.

He lowered his paper slowly, fixed me with a stony eye and said: 'You’re supposed to be an author aren’t you?'

"I started to mumble an apology but he broke in: 'Well f*** off and auth' and raised his paper."

• Kristy Valenti's three-part article on Peter O'Donnell - Part One; Part Two and Part Three at comiXology
Posted by John Freeman at 8:00 am

Nice tribute to Mr. O'Donnell - his creation really is timeless, and the character of Modesty Blaise continues to inspire people.
Also, Souvenir Press is reprinting the entire novel series, with the recent addition of the previously rare Pieces of Modesty short story collection, so those who have not yet discovered the novels no longer have to search Ebay for them! They're all available on Amazon and other retailers.