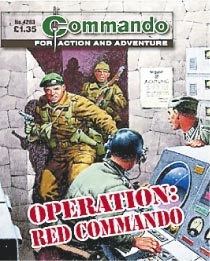 If you're looking for the first four new Commandos released for the first half of April, you'd better be quick. The next batch will be out on 22nd April as publishers DC Thomson have had their sale dates brought forward.

This means four new issues of the popular, long-running pocket war comic digest will then be every fortnight until July, so Commando will now go on sale on the first Thursday of every month rather than the second.

Commando 4283 - Operation: Red Commando
Story: Alan Hebden Inside Art: Vila Cover Art: Ian Kennedy (could that be a touch of Dan Dare on the radar Console?)

In early 1942, Lieutenant Rory Granger and his Commando squad were chosen for a daring mission to destroy a vital German radar station in the far north of Norway.

However, the plan went awry. Rory and his men found themselves up against a ruthless enemy in the bitterly cold wastes of Russia, fighting just to stay alive! 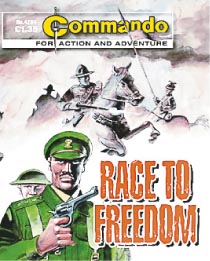 Reeling back from the German onslaught in May 1940, Private Tom Dawson and his mate, Harry Greene, saw their company decimated in a terrifying Stuka attack. They teamed up with other stragglers — including a very unconventional Signals officer — determined to join the mass evacuation at Dunkirk. But to get to those beaches they’d have to make a perilous journey through occupied Belgium... 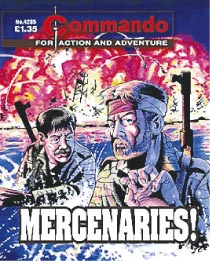 Thirsting for excitement and adventure, paratrooper Jack Nash had seized the chance to become a mercenary — a hired soldier in someone else’s war — with the promise of action and a hefty pay-packet.

Well, Jack got plenty of action — more than most men could handle. As for the money, that might just be a different story... 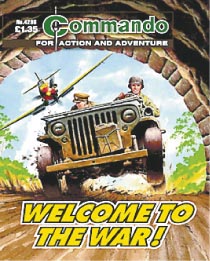 They kept telling Andy Webster that he was doing a great job, beavering away behind the scenes as the war raged all over Europe. But that wasn’t good enough for Andy. He wanted to be in the front line, right in the thickest of the action.

Well, his dearest wish would come true far sooner then he thought, but there was one big snag. It didn’t look as if he would survive to enjoy the glory!