That Alan Moore, He Likes to Draw 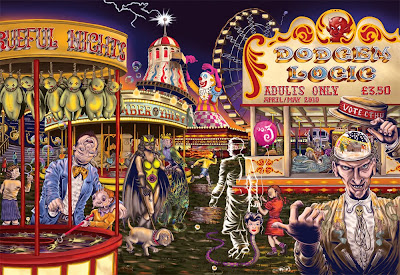 The Forbidden Planet Blog Log has just posted this fab wraparound cover for esoteric comics-magazine-thing Dodgem Logic #3 (courtesy of Knockabout Comics), featuring artwork by none other than Alan Moore himself, who as older readers will recall, once drew the marvellous Maxwell the Cat before he got distrcted by a dubious writing career...

Issue 3, is a monster of an issue and comes perfect bound. While that also means a price increase, we're assured the pages contain a rare compendium of delights.

"We’ve got confessions of calamitous careers in the constabulary, step-by-step instructions for do-it-yourself diabolism and the rigorous recriminatory ruminations of a rogue town planner," say the publishers. "We’ve got divine decadence and sultry San Francisco nights along with the exploits of troubled everyman Johnny Viable, some glamorous graffiti, and a tantalising T-shirt transfer from the crayon box of Dodgem Logic’s vendor of voluptuousness Melinda Gebbie."

• Order Dodgem Logic #3 from Forbidden Planet International - or buy it from your local specialist comic shop
Posted by John Freeman at 2:09 pm