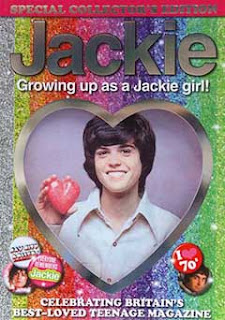 (With thanks to Jeremy Briggs): News of Egmont's Comic Specials prompts us to mention this new collection of material from Jackie magazine, which was published by D C Thomson & Co Ltd.

Launched in 1964 at the height of Beatlemania, the title remained a girl’s best friend until 1993 and this Special Collector’s Edition celebrates the denim-clad decade of the 1970s, when Jackie, famous for its romantic photo stories, sold over one million copies in a week.

Jackie of course brought girls endless features on David Cassidy's favourite colour during that period, and the much-cited agony column, 'The Cathy and Claire Page'. Models who appeared in the photo strips included Garbage band member Shirley Manson (who is now a Terminator on The Sarah Connor Chronicles), BBC news reader Fiona Bruce, who was paid just £3 an hour for her work, and actress Leslie Ash.

Contributors included author Jacquleine Wilson and it was edited at one time by TV critic Nina Msykow, although its first editor was an ex-RAF Engine Fitter, Gordon Small.

The title is essentially a Jackie version of last year's Beano special (which was effectively a preview for the History of Beano book).
Posted by John Freeman at 1:17 pm