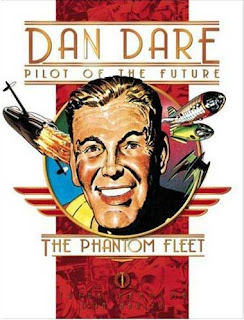 Officially on sale this week is Dan Dare: Phantom Fleet from Titan Books, the latest in the company's high quality collections of the classic Eagle comic character.

First published in 1958 and written by Frank Hampson and Allan Stranks with art from Hampson, Desmond Walduck and Keith Watson, the story opens with radio and TV transmissions disrupted throughout the Solar System. Spaceships - including one carrying Sir Hubert - disappear, Dan and company set out to discover what's going on.

They find a fleet of huge alien craft containing peaceful aquatic creatures called Cosmobes who are fleeing from another aquatic race, the warlike Pescods. But the Pescods have a deadly weapon, the 'Crimson Death' -- and they're heading for Earth! Will Dan and his crew be able to once again save the day?

The story marks the debut of Keith Watson on the Dan Dare strip, who joined Frank Hampsons's studio as an assistant artist in 1958. Eagle Times notes that after Hampson left in 1959, and Frank Bellamy took over as lead artist on Dan Dare, Keith continued along with the remainder of Hampson’s team but, dissatisfied at the way of working, he too left in 1960 - to draw Captain Condor in Lion. Two years later, he returned to Eagle as the sole artist on Dan Dare, and continued until early 1967 when the comic began reprinting old Dan Dare strips. Sadly, after being diagnosed with cancer, he died in 1994.

Phantom Fleet is the only Dan Dare title planned for early 2009 release from Titan, but the company continues to publish several British comics collections including Modesty Blaise: The Ladykillers, Tank Girl Remastered, Torchwood: Rift War (all due 24 April) and The Best of Wallace & Gromit (29 May).