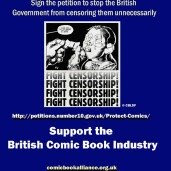 Concerns about Britain's Criminal Justice & Immigration Act 2008 which came into effect in January 2009 and Section 49 of the Coroners and Justice Bill which is currently being reviewed in Parliament are growing among comics creators and fans, with over 360 signatories to an online petition voicing concern about the legislation.

As we previously reported, both of these Acts could impact on the creation of comic books and how they are sold, both have the potential to land innocent people in court, on the sex offender register or in jail. Campaigners are asking that the Prime Minister and the government as a whole respect the concerns of artists, writers, publishers, readers and retailers all over the UK and include a specific clarification in the law that ensures that no innocent comic creators or owners of comics can ever be prosecuted unfairly by a misinterpretation of the current laws.

These laws actually extend to any form of image making (paintings, sketches, doodles, etc) and not just the comics media, so everybody will be effected by it. The government wants to legislate that any drawing they deem "inappropriate" is tantamount to the same laws as a photography, thus preventing anyone from drawing certain things.

If ever there were "thought crime" laws, these are it, argue campaigners, who have now formed the Comic Book Alliance to raise awareness about the issue as well as promote British comics.

"It needs some sort of clarification of what would come under it," says comic creator and Clown Press publisher Adam Grose in an interview for politics.co.uk. "It needs plain English and not such an open interpretation. Once it becomes law it's suddenly up to the police – although obviously the CPS make a judgment on it. But unless you know where you're standing you've got be very careful.

"It really hit me when they mention books by Alan Moore like The Lost Girls or Watchmen. People have even talked about how [2000AD's] Judge Dredd might be affected. It's highly unlikely, but then it might affect what editors will accept."

"If we don't stop this now we will have thrown away a huge freedom of expression. This is the thin end of an enormous wedge. The consequences of which could ultimately be a government deciding what is "approved art" and what is banned, which sounds a lot like 1930s' Germany to me."

• Sign the petition: http://petitions.number10.gov.uk/Protect-Comics
• The Comic Book Alliance has been set up to promote this campaign as well as British Comics: www.comicbookalliance.org.uk
• You can write to your MP via WriteToThem.com

• What do you think? Discuss this issue on the downthetubes forum
• For a complete look at the new law, visit the official site

• For further comments see:
• Coroners and Justice Bill: the most toxic law ever?
• www.theregister.co.uk/2009/01/19/evil_cartoon_badness
• Mark Lawson commented on these proposals in The Guardian way back in May 2008
• "Professor Sapient" outlines the issues in considerable detail here, also noting censorship elsewhere - more food for thought
Posted by John Freeman at 10:44 am