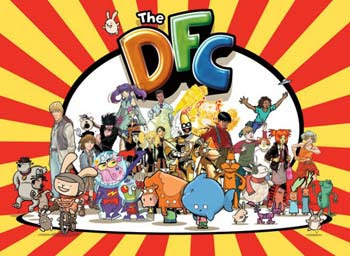 Despite its demise -- unless Random House have found a buyer -- there is some good news. First, with The DFC ending at Issue 43, the editorial team are well aware some of the strips have been cut off in their prime, much to the dismay of loyal readers. Luckily the remaining episodes of Monkey Nuts, Bodkin & the Bear, Donny Digits and Spider Moon have been put online for all to read and enjoy. View them at The DFC website.

The DFC web site, confirming Issue 43 is, for now, the last issue, also suggests that award-winning author Philip Pullman's strip, John Blake, will return in some form. "The Mary Alice and her crew has vanished into the mist again for now, but we’re sure she’ll reappear somewhere soon, so keep your eyes peeled" 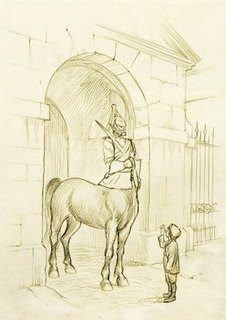 SciFi strip Spectrum Black by Robert Deas, which started in Issue 38, is appearing online at www.spectrumblack.com and Dave Morris and Leo Hartas have started a blog to complement online promotion for their beautiful-looking Mirabilis adventure (more info at www.mirabilis-yearofwonders.com).

There's more good news, too. The comic creators, writers and artists who were brought together by this exciting project have gathered together for a new venture - the Super Comics Adventure Squad!

"The DFC isn't dead," says Garen Ewing. "David Fickling and his inspiring team brought into this world something new and exciting, something that is just too good to disappear back into the ether. So until it finds its place again, the creators who found a home under the covers of The DFC (both published and nearly published) have come together under the guise of the Super Comics Adventure Squad.

"Despite the Economic Woe, it is still an exciting time for the medium of comics and this blog will act as a hub for some of the best in British graphic storytelling talent, a place where you can keep up with what they're doing, all in one place, and where they will post news, events, sketches and comics, with links back to their own websites where you can see and learn more."

The blog already features a small archive of posts to view, written over the past week as the team got ready to go live, including, for instance, some of the concepts that nearly became DFC strips (and may yet find an outlet somewhere else).

Despite this good news for keeping the DFC's talented creators in the spotlight, loyal readers will miss the title. "Molly and I are obviously really sad to see it go, since it’s introduced us to many, many great strips and many, many great writers and artists," says advocate and parent Richard Bruton. "It’s definitely succeded in making Molly a proper comics fan for which I thank it. Before the DFC she was, like many children I’d imagine, rather more interested in what piece of plastic crap was attached to the front of the comic or magazine, but the DFC changed that... it was a valiant attempt to do something different, something better." (Read his full tribute here)

• Check out this new incarnation of The DFC's spirit at: supercomicsadventuresquad.blogspot.com

• A group of readers are trying to raise funds to stage a 'subscriber' buy-out of the title and have launched a blog to chart the progress of the campaign at: savethedfc.blogspot.com

• Richard Bruton pays tribute to The DFC here on the Forbidden Planet International blog
Posted by John Freeman at 7:56 am