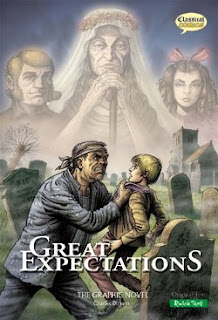 The tale of Pip, Miss Havisham, and the spiteful Estella, retold with fresh enthusiasm...

No, you haven't been transported to an alternate dimension where downthetubes reviews literary fiction and the entire team smokes clay pipes around a roaring fire and ruminates on the work of John Donne and Charles Dickens. This really is a review of Great Expectations -- the glorious, beautifully realized graphic novel brought to life by the Classical Comics team.

I have to confess that until now, my experience of Great Expectations has been confined to BBC Sunday serials and the 1946 David Lean film. I have read Dickens' Oliver Twist at school and some of his other works, such as Christmas Carol and The Signalman, but in terms of actually getting to grips with the original novels, I've been sadly lax.

I'm pleased to report, then, that John Stokes serves up an interpretation of that "original text", adapted in style by Jen Green, with confident aplomb, delivering page after page of beautiful, detailed and lovingly rendered art, perfectly complementing Dickens' story. Without wanting to detarct from the equally enjoyable work Mike Collins did on Classical Comics version of A Christmas Carol, It makes you wonder just why John seems to have been so absent from British comics for such a long time, such is the quality of what's on offer. His attention to detail, without losing sight of the need for strong storytelling is in evidence throughout, as you'll see from these sample pages.

The story, of course, is a complex mix of mistaken intent, unrequited love and unexpected twists as protagonist Pip discovers almost all those who have shaped his life have some unknown connection or shady past. Again, the art breathes life into the entire cast without resorting to stereotype: Stokes' version of the convict, Magwitch, is as believable as the twisted, heart-broken Miss Havisham.

Throughout, this adaptation delivers a powerful re-telling of Dickens novel, with gorgeous art that aids the storytelling and helps make sense of the many characters and their relationships. I was also delighted to find this version went with Dickens later, alternate ending to the story, which for me sat much better with the story and is not as downbeat as the original.

If you need any further convincing that I enjoyed this edition, I sat down to read the Original Text version and genuinely couldn't put the thing down until I'd read it. For a nineteenth century novel to grab my attention so is no mean feat and its testament to the hard work the Classical Comics team put into the book. They've succeeded in creating a superb re-telling of a classic piece of fiction and, more importantly, given it a whole new dimension through its stunning art that will surely appeal to a wide range of readers.