Howard Chaykin on Board for BICS 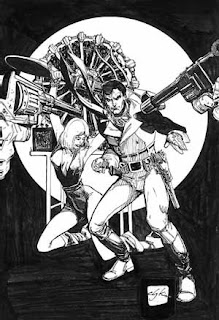 With a career spanning four decades, Chaykin's earliest work includes Ironwolf in the science fiction anthology title Weird Worlds for DC and Dominic Fortune, (inspired by his Scorpion character, originally drawn for Atlas Comics) for Marvel. Cody Starbuck, published in the anthology title Star Reach, was one of the first independent US titles of the 1970s.

He also worked on Heavy Metal and drew a graphic novel adaptation of Alfred Bester’s The Stars My Destination, and produced illustrations for works by Roger Zelazny.

American Flagg! first appeared in 1983, published by Chicago-based First Comics. He then updated and revamped The Shadow in a controversial but strong-selling four-issue mini-series for DC Comics in 1985. It was this book that arguably established him as a major creators in US comics, although his dedicated fans had been following his work for years.

These books were followed by titles such as graphic novel series Time2, described by Chaykin as one of his favourites among his own output, DC Comics character Blackhawk and his controversial but high-selling Black Kiss, a 12-issue series about sex-obsessed vampires in Hollywood published by Vortex Comics containing explicit depictions of sex and violence.

Outside comics, his film and television work includes Executive Script Consultant for the CBS The Flash television series and the action-adventure series Viper. He was also part of the creative team on Mutant X.

Asked how he would like to be remembered, he once said, "I'm a cult figure. I never became a star, and I'm comfortable with that."

"We're thrilled that such a visionary and prolific creator will be joining us this year for our annual celebration of the medium," says BICS co-coordinator Shane Chebsey, adding that UK guests confirmed for the weekend event include Alan Davis, Charlie Adlard, Duncan Fegredo plus many many more.

• To find out more about BICS 2009 at Birmingham's ThinkTank over 3-4 October visit: www.thecomicsshow.co.uk where you can also book tickets for the show.
Posted by John Freeman at 1:33 pm