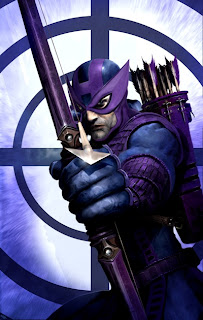 As rumoured a couple of weeks back, former 2000AD editor and top writer Andy Diggle has signed an exclusive contract with Marvel Comics and will soon begin a run on Daredevil, and a Hawkeye mini series, Dark Reign: Hawkeye, starts next month.

Daredevil has been written most recently by Brian Michael Bendis and more recently, Ed Brubaker.

"Brian’s run ended with a fantastic cliffhanger," Andy noted in an interview on Marvel.com, "namely, Matt Murdock exposed and in prison - and Ed’s been gracious enough to leave me with an equally provocative starting-point for my run.

"Obviously, I don’t want to spoil it, but let’s just say it’s a pretty challenging set-up that cuts to the core of what defines Matt Murdock, and Daredevil, as a character. It’s pretty crazy! It’s gonna get people talking, no question.

"...The challenge for me will be telling a story that’s distinctly Daredevil yet still feels fresh and new, without simply re-treading what’s gone before," he added. "Staying true to the character and the spirit of the series, while still being able to shake things up and subvert expectations. That’s always a fine line to navigate. But like I say, Ed’s leaving me with a hell of a cliffhanger, and exploring the ramifications of that new status-quo is going to take us to some very dark and interesting places." Read the full interview

Diggle, whose credits include Thunderbolts, Hellblazer, The Losers and Green Arrow: Year One as well as being a former editor of 2000AD, refused to be drawn on who will draw the book in an interview for Newsarama’s Matt Brady, although rumours are flying that it could be 2000AD artist Jock.

Diggle says Frank Miller's run on Daredevil is his favourite ear of the comic and "If I had to choose one story in particular it would have to be Elektra Lives Again. What an amazing book. Just beautiful, heartbreaking, and technically brilliant. I love the use of Catholic imagery there; the fact that Matt’s this haunted character, always running to try and catch something just out of his reach; and I love the fact that it’s so terse, so visually driven, with almost no exposition.

"I think the character’s physicality really lends itself to that kind of visual storytelling," he argues. "You don’t need pages of dialogue to show Matt’s carrying the weight of the world on his shoulders; you can see it. We get it."

Dark Reign: Hawkeye #1, out next month, written by Diggle and drawn by Tom Raney, poses the question: how can one move instantly jeopardize the entire Avengers legacy? Norman Osborn knows and has something planned – something big! He appoints a new team of public do-gooders to replace the original Avengers, bringing the psychotic Bullseye, known to the media as Hawkeye, into the game. What else is Norman scheming? And how long will it be until the public realizes that Hawkeye is actually a crazy assassin?

(Please note, we know Jock also has an official web site but every time we visit, it freezes our browser, we think because of some javascript on the home page. We'd like to tell him, but we can't get to his contact page!)