Book And Magazine Collector issue 296 has a 15 page article by Norman Wright and David Ashford to celebrate the 70 anniversary of the publication of the first issue of the Beano dated July 30 1938.

The issue is available from WH Smiths and Easons, or from the B&MC website.

The Cartoon Museum in central London will be holding an exhibition to celebrate the 70th birthday of the Beano. Entitled the Beano And Dandy Birthday Bash, it will run from 30 July until 2 November.

More details are available at the Cartoon Museum website. 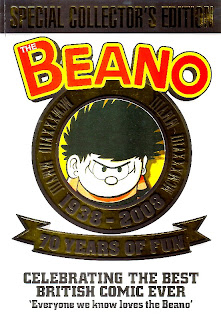 Finally, and perhaps most importantly, DC Thomson have published a Beano Special Collector's Edition. This 68 page square bound magazine is a lovely publication which includes pictures of DC Thomson file copies of early Beanos, photos of original artwork of Minnie The Minx and The Bash Street Kids, and a preview from the new Dennis and Gnasher animated series for the BBC.

The Beano Special Collector's Edition costs £4.99 and seems to be selling fast at those main newsagents that have copies. Lew Stringer has more illustrations of it over on Blimey!

Posted by Jeremy Briggs at 4:48 pm