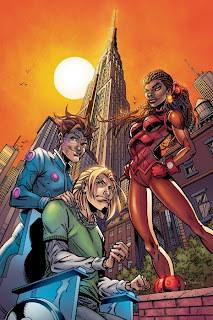 A new theme park based on comic book series The 99, which has featured work by British artists John Royle and John McCrea, has opened at the Slayel Al-Jahra Resort in Jahra, Kuwait.

Based on the Teshkeel Comics’ comic of the same name, is a joint venture between Teshkeel Media Group and the United Entertainment and Tourism Company and features rides based on characters from the series, including Jabbar’s Chariot Riders (a train-ride), an aeroplane ride named after flying character Rafie and a swinging Viking ship called Journey of the Noor Stones.

The 99 are the world's first superhero team based on Islamic culture and history, featuring 99 characters from 99 different countries, each character's powers reflecting one of the traditional 99 attributes of Allah in Islam. Examining the lives of individual characters from many different cultures and backgrounds, these characters find themselves transformed from ordinary human beings into super-powered heroes.

“Seeing our characters transformed from 2D drawings into a real-world setting is not only a dream come true for me," Dr Naif Al-Mutawa, founder of the Teshkeel Group, told the Kuwait Times, "but also an indicator of the tremendous growth potential for the 99 brand.”

The two companies plan to open a new park each year for the next six years. Teshkeel Comics partnered with Marvel to publish popular comic book titles in the Arabic language for the Middle East back in 2006 (see news story).

• You can download a free copy of The 99: Origins comic, with art by John McCrea from The 99 web site
Posted by John Freeman at 12:41 pm