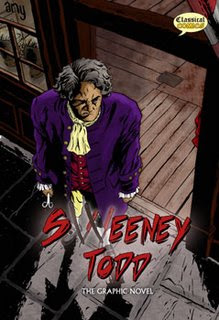 • British comics creator Sean Michael Wilson, whose recent credits include writer for Classicial Comics upcoming Canterville Ghost (out in November) and Sweeney Todd (out next year) adaptations, has become, we believe, perhaps the first British creator to have a comic on Japanese mobile phones (comic strip on mobile is known as Keitai manga in Japan).
"A Japanese language version of my Lafcadio Hearns Japanese Ghost Stories book is now out in Japan, in two formats," Sean, who lives in Japan, told downthetubes. "As an e-book and an edition for mobile phones. Both formats are big business in Japan." More on this story on our dedicated Mobile Comics blog

• Eddie Campbell has posted a snippet of an interview with Alan Moore from back in 2000 in which he talks about his take on what happened to Big Numbers, whose never-published third issue surfaced on e-bay in January, albeit only as photocopies (see news story). Alan seems to clearly have wanted to try again with the project with issue 1, but also recognizes the impracticalities of that. "I don't see any way that I can resurrect it as a comic strip," he told Blather.net. "I mean, what do I do? Do I actually sort of say "Yeah, we've got a great new artist, are we going to start from #1 again but this time, no, buy it, because this time we really will get to issue #12." I mean, I wouldn't buy that if I heard it from somebody who'd kind of failed twice to do what he said he was going to do." Eddie also thinks he's uncovered art from #4, featured in this post on his blog.

• Talking of Alan Moore, Pádraig Ó Méalóid has transcribed and kindly sent us a draft copy of his wide-ranging interview with the comic creator, scheduled to feature on the Forbidden Planet International blog soon. It's a doozy, with plenty on the League of Extraordinary Gentlemen including plans for the next tale to centre on a group of superheroes, projects such as The Bumper Book of Magic, his novel, Jerusalem and confirms that a new Bojeffries Saga, which is being right now by Steve Parkhouse, is in the works and will be released as part of a collection of al the Bojeffries strips!

• DFC contributor Sarah McIntyre has offered a bit of 'Vern and Lettuce' back story on her LiveJournal, and tells us an Oxford Literature Festival panel on Saturday 4 April about the project is still going ahead. It should a chance to ask questions of David Fickling and several creators (Robin and Lorenzo Etherington, Sarah and John Aggs) what happens next... All participating children will receive a free copy of The DFC. More info here

• (via Kasterberous): How do you know if you’re in a parallel world? This week’s issue of Doctor Who Adventures, out now, is a parallel worlds special. Discover what happened when a sinister fortune teller made Donna rewrite history in last year’s episode Turn Left. You can also find out about all the weird alternate realities in Doctor Who – and learn how to see if you have strayed into one by accident. The issue comes with a free set of badges and a model time watch as worn by companion Donna.

• With Accent UK's 2009 graphic anthology Western now available (buy a copy now), Lee Robson has decided to indulge in some some shameless self-promotion for the the strip A Fistful Of Steam Valves (by him and Bryan Coyle) which features in the very pages of that book and featured a couple of the story's steampunk designs on his blog.

• And finally... London-based publisher NoBrow has released its first book, Gods and Monsters, and is running an exhibition in May of some of the art. More info here. The diverse contributors were hand picked for their unique styles and all were invited to generate work based on the theme. Some are up and coming, others are plucked from unexpected places, but as you'll see if you follow some of the liks below, all are talented: Dave Taylor, Alex Spiro, Sam Arthur, Jordan Crane, Emiliano Ponzi, A. Richard Allen, Jens Harder, Reuben Rude, Benjamin Guedel, Eda Akaltun, Matthieu Bessudo, Caspar Williamson, Toby Leigh, Alex Bland, Ben Newman, Nick White, Stuart Kolakovic, Sarah King, Leah Hayes, Paul Blow, Bjorn Rune Lie, Brett Ryder , Carl Johanson and Blexbolex.

(Compiled with thanks to Matthew Badham, Sarah McIntyre and Pádraig Ó Méalóid)
Posted by John Freeman at 11:38 am