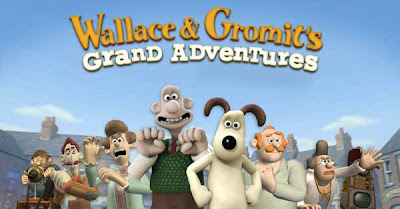 Model citizens Wallace & Gromit have appeared on screen and in comics, and now they're back once again in a game: this time in Wallace & Gromit's Grand Adventures, a new game series debuting today at www.telltalegames.com.

"Fright of the Bumblebees," the first of four digitally-distributed games starring the popular Plasticine duo, is available now and subsequent installments will be delivered in May, June, and July.

Wallace and Gromit's most recent TV outing, Wallace & Gromit in A Matter of Loaf and Death, out now on DVD, aired with record-setting viewership this past Christmas in the UK.

Alternating between the roles of both Wallace and Gromit throughout the game, players will banter with a charismatic cast of characters, tinker with Wallace's creative contraptions, and enjoy four all-new stories set in the colorful Wallace & Gromit universe. In today's debut episode, "Fright of the Bumblebees," Wallace attempts to save his bumbling honey business through the growth of supersized flowers. When these giant flowers lead to an unintended consequence, giant bees, Gromit must step in to save the town from the angry swarm.

"The partnership with Telltale was a natural one," says Sean Clarke, Head of Aardman Rights. "Their talent for crafting engaging adventures with humour and charm fits well with the Wallace & Gromit style, and the four games of Wallace & Gromit's Grand Adventures make excellent new additions to the series."

To celebrate the series premiere, Telltale is offering the full series on PC for the limited-time special price of $29.95 (around £21), a 15% savings on the regular price of $34.95 (about £24). During the launch week, customers who purchase Wallace & Gromit's Grand Adventures will also get an amazing 50% discount on all other items in Telltale's store, including the acclaimed Sam & Max games, Strong Bad's Cool Game for Attractive People, and related merchandise. These special offers expire 29 March 2009.