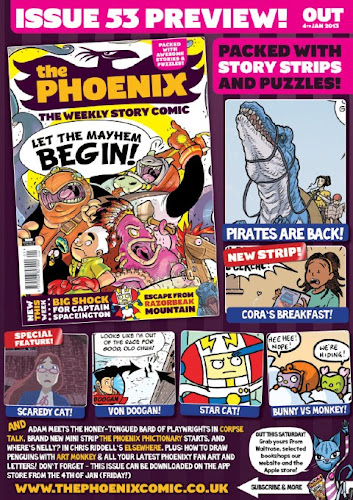 If you haven't sampled The Phoenix - the lively weekly childrens comic aimed at 8-12 year olds that sprang from the ashes of The DFC - then those of you who have or were given shiny iPads for Christmas are being offered the chance to do so as the title launches its digital edition - backed by an unbeatable launch subscription offer of just £9.99 for six months, for this coming week only.

Despite huge acclaim, a great creator line up and an attractive print subscription package (albeit, we're told, some initial glitches for some), The Phoenix, like The DFC, has suffered from a lack of presence on the shelves of your local newsagents or supermarket. It's currently to be found in Waitrose, but for a lot of the country that supermarket chain is still nowhere to be seen, so sampling The Phoenix before committing to a subscription has not been possible.

The launch of the digital edition changes all that, offering not only a great-looking comic app available worldwide, courtesy of downthetubes sponsors Panel Nine but a sampler issue as an appetiser - and a staggeringly cheap, one week only six month subscription offer.

It's an offer that has proven an instant success, with the app currently the top-grossing Children's Magazine in Apple's Newsstand, beating out CBeebies, Doctor Who, Pokemon and Barbie.

The comic reader not only enables a page per view option but also features an impressive 'Panel Mode' feature that presents each strip panel one at a time with a simple 'double tap' command. For those relucant comic readers, unsure even how to read a comic (sadly, a common affliction thanks to a decline in comics literacy), this helps them learn just how to digest a great strip before going on to enjoy The Phoenix at its full page best.

A fabulous mix of humour strips and adventure serials and carefully designed feature pages that put the boot firmly into many rivals offerings in terms of puzzles and interactivity, the launch issue of the digital Phoenix includes an impressive roster of talent.

Pride of place surely goes to the return of Pirates of Pangaea by Daniel Hartwell and Neill Cameron, plus Cora's Breakfast by Nick (Hugo Tate) Abadzis and plenty more, including Long Don Gone by Don Skelton and Star Cat by James Turner.

The app is the work of digital comics company Panel Nine, who have have created the digital Phoenix for Apple’s Newsstand for iPad service. It's a slick comic reader, with a good choice of font size and the aforementioned Panel Mode view (although I think I'd still like a pinch and zoom option, too, but you can't have everything).

Given that a single printed issue costs £2.99, the subscription launch offer is really good - but it ends very soon, so head over to the iTunes store now to take advantage!

Now all we need are digital back issues or print/digital collections of the best strips in the first 52 issues of this great comic!