Doctor Who Adventures at 300: An interview with artist John Ross 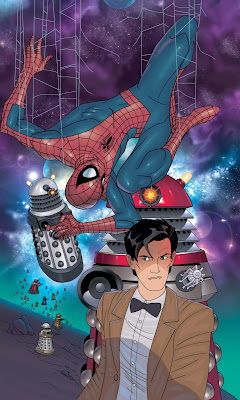 Doctor Who Adventures has just notched up its 300th issue - and downthetubes caught up with comic artist John Ross, who has drawn a strip for every issue of the popular title...

John worked on a lot of magazines for Marvel UK  from the mid 1990s up until 2006, most notably Spectacular Spider-Man Adventures, Doctor Who Magazine and Action Man, which he did for nearly 10 years. During that time, he also worked for other companies including Eaglemoss, BBC Magazines, and GE Fabbri on titles like Jackie Chan Adventures, Spider-Man: Heroes and Villains, and Doctor Who - Battles In Time.

Since 2006, he's mostly been working on Doctor Who-related stuff and primarily on the Doctor Who Adventures magazine, drawing the strip in every issue. Currently, he's illustrating the Doctor Who Annual 2014 for Penguin Books as well as doing the weekly strip in DWA.

downthetubes: How did you get the job as regular artist on Doctor Who Adventures?

John Ross: As far as I can remember, BBC Magazines contacted Marvel UK's Doctor Who Magazine and asked for a recommendation. I'd drawn a few strips for DWM, so the guys there knew my work. Also, they may have seen my strip work in Doctor Who - Battles in Time, which I'd worked on before DWA... Whatever happened, the BBC contacted me and asked to see some character pix of the Doc and Rose. I sent some in and got the job.

I've been on it ever since and I have to say it's possibly the best job in the business. I get to draw an enormous variety of characters and locations every week, as well as the Doctor and his classy companions! I work with great people who are passionate about what they do and are dedicated to making the best mag they can. They're constantly striving to keep things fresh and there's a big re-launch planned to coincide with the start of the new series.

downthetubes: Are you a fan of Doctor Who and if so, who is your favourite Doctor?
John: I never miss an episode now but I wasn't what you'd call a massive fan when I was a lad. I watched the series on and off through the years, though and have vivid memories of being terrified! I think Matt Smith is brilliant.

downthetubes: You've drawn a huge number of stories - any particular favourites after 300 issues?

John: Well, there are a heck of a lot, way too many to mention... some that spring immediately to mind are -  Oscar Wilde and the Vampires,  Order of the Bonemenders, the Doc and Heather stuck on a sinking U-Boat during World War Two, the 10th Doctor's farewell, the 11th Doctor's first appearance, stories set in Edinburgh, Leeds, Manchester, Central London, Lavender Hill, 1950s Chicago, 1960s Carnaby Street, the introduction of current DWA companion Decky, and there were two great Christmas stories this year.

There have been loads of incredible characters such as the pregnant alien on a tank, suicidal crash test dummies, the snot monster, the ear worm, and there has to be a special mention for the Screamer - a terrifying head on a hand created by a DWA reader. Also, there's an interesting penguin/owl crossbreed appearing in an issue out soon! I could go on, the list is almost endless.

downthetubes: A project like this inevitably attracts comments over likenesses, how do you tackle the demands of readers and (I assume) the actors?

John: The DWA editors give me feedback and also pass on comments from approvals people in Cardiff and from the actors themselves. I've been lucky in that there haven't been any major issues...   I work closely with the editors when sketching out a new character (Doc and/or companion)  until everyone's happy with the look.  It's rare that I'm asked  to make changes to a character after the initial character sketches have been approved.

For me, though, it doesn't really end there - I'm always looking at improving in any way I can. In fact, that's the case in all areas of my work, not just the look of the characters.

downthetubes: How much support do you get in terms of reference materials, especially when things like the TARDIS is redesigned?


John: The DWA team send a massive amount of reference. I've got loads of pix of the new TARDIS to study...

John: Current companion Decky is fantastic, and I've got a soft spot for Heather, she had a lot to contribute. Decky and Heather are both DWA reader creations and it was interesting seeing some of the entries for the "Design a Companion" competitions, DWA readers have real imagination!

downthetubes: 50 years of Doctor Who - what do you think is the key ingredient that's given it such longevity?
John: For me, it's purely because it's impossible to get bored! Every story can be set in a different time period in a drastically different location - visually, there's something new every time and there's no limit on how outrageous the supporting cast can be, from aliens/monsters to actual characters in earth's history. The only boundary is the creator's imagination.

downthetubes: Have you written any of the stories? And, if not, what would you love to see the Doctor battle in a new story?

John: I haven't written any of the stories, but I like big, bad, ugly monsters and aliens so anything featuring those is fine by me. If I was offered the job on a Doctor Who/ Spider-Man crossover, I wouldn't turn it down.

downthetubes: As well as Doctor Who Adventures, are you working on any other projects?

John: At the moment, I'm also working on the 2014 Doctor Who Annual for Penguin Books. I've drawn the strips in those every year since 2007. I do four pages of pencils and inks for DWA every week, which is enough to keep most artists busy... so I don't do a great deal of other stuff.

Occasionally, I do advertising work and last year I did concept art for Russell T. Davies' Wizards vs Aliens TV series. Russell had liked my work in DWM and DWA and asked for me to get involved.  And I do commissions.


John: Study everything - anatomy, composition, perspective, visual storytelling etc. It's great to be able to draw cool characters but if you want to work professionally, you must have a solid all round knowledge.

I'd also strongly recommend that you learn to draw from life as opposed to comics - that way you're more inclined to develop your own style and less likely to copy other artists mistakes! :-)