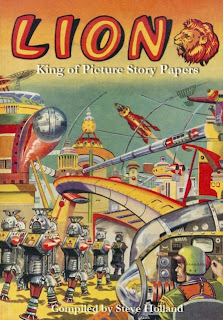 Steve Holland of the Bear Alley blog is just about to release Lion: King Of Picture Story Papers, the second of his updated comics indexes available from Bear Alley Books.
Lion was a weekly boys adventure comic published by Amalgamated Press beginning in February 1952. With a cover character of spaceman Captain Condor, Lion was AP's answer to Hultons' Eagle comic and its cover character Dan Dare although, in its early days at least, Captain Condor was definitely the poor relation. Ironically enough with the AP/IPC takeover of Hultons in the 1960s, Eagle became part of the same company as Lion and was eventually amalgamated into it in 1969. Lion continued on until May 1974 when it was amalgamated into Valiant.
Steve tells the story of this in the book as well as providing a detailed stripography of the comic's stories with creator details in an A4 book that runs to 262 pages. The book's stripography also covers all the Lion annuals and specials.
Lion: King Of Picture Story Papers is due to be published on Friday 18 January 2013 and will cost £25.99 plus £4 UK postage. However all pre-orders received before then will get a 10% discount on the cover price. 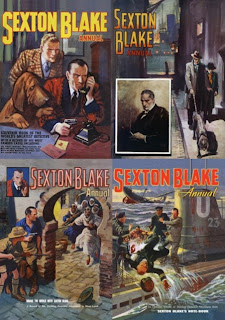 The previous comic index, covering Hurricane and Champion, is still available from Bear Alley Books as well as titles on artist CL Doughty, Peter Jackson's London Is Stranger Than Fiction, reprints of the rare Sexton Blake annuals for 1938, 1940, 1941 and 1942, and three titles covering the full run of the World War One era Eagles Over The Western Front comic strip from early 1970s issues of Look And Learn magazine..
There is more information and ordering details of all the Bear Alley Books on the Bear Alley Books blog.
The Hurricane and Champion Comic Index was reviewed on downthetubes here.
Posted by Jeremy Briggs at 7:00 am