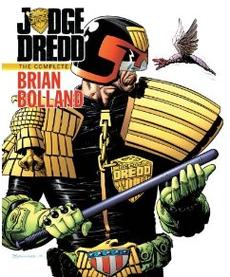 Mega-City One, 2099. This vast urban nightmare has sprung up from the post-apocalyptic ashes of North America's east coast.

Each of the 400 million citizens based there is a potential criminal and only the Judges can prevent total anarchy. These future lawmen are judge, jury, and executioner.

Toughest of them all is Judge Dredd - he is the Law! By the end of 1977 Brian Bolland was regularly handling art chores for John Wagner's scripts on Judge Dredd. All told, he illustrated 19 stories. Judge Dredd: The Complete Brian Bolland collects these stories in oversized format, featuring meticulous modern colouring by Charlie Kirchoff.

Brian Bolland, whose asociation with Forbidden Planet goes back to the 1980s as the designer of their iconic 'People Like Us' advertisements and, later, the t-shirts, has earned a reputation as one of the best cover artists in the industry, and his elegantly composed and beautifully rendered pieces have graced a host of titles, including Animal Man, Batman, The Flash, The Invisibles, Wonder Woman and many more.