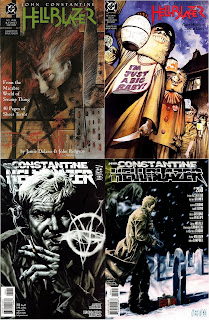 Panel Borders returns after the Christmas break for a new series in an earlier slot on Sunday evenings. Starting a series of shows about the 25th anniversary of the occult detective John Constantine's first appearance in his own solo comic book, Alex Fitch talks to writers Jamie Delano, Andy Diggle and Peter Milligan, and artist David Lloyd, about creating issues of Hellblazer from its first issue to the present day.
Jamie and David discuss the early days of the comic, launched as a spin off from Alan Moore's acclaimed run on Swamp Thing while Andy and Peter talk about bringing the character into the 21st Century.

(Recorded in front of a live audience at SCI-FI-LONDON, Apollo Piccadilly Cinema, April 2011)