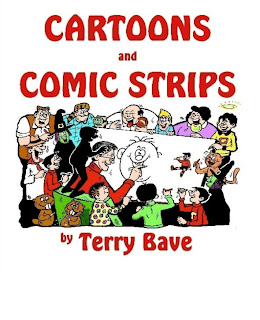 (with thanks to Lew Stringer): Terry Bave, artist of numerous comic strips in British humour comics from the late 1960s to the 2000's, has published his autobiography.

Terry was at the heart of English cartooning and had a long, successful career as an artist working on children's comics, such as Whizzer and Chips, Cor!!, Buster, Whoopee, Dandy and Beano. From the heyday of the 1960s and 70s, Terry saw the rise, and eventual decline, of creative cartooning for children's comics.

Working with his wife Shiela, he created new characters, developed old ones and produced a legacy of a huge body of work focused, always, on children. Living retired in Devon, his fertile imagination and still inventive pen have produced a book full of warm, funny and historical reminiscences, edited and published with the assistance of his daughter-in-law, Rebecca Bave.

• A must-buy for fans of UK humour comics: http://www.lulu.com/shop/terry-bave/cartoons-and-comic-strips/paperback/product-20625272.html
Posted by John Freeman at 6:34 pm