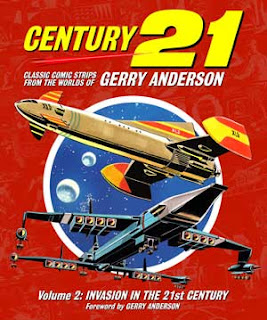 • The Century 21 hardbacks -- TV Century 21 and Lady Penelope comic collections lovingly put together by British publisher Reynolds & Hearn (see news story) featuring art by the likes of Frank Bellamy, Mike Noble and others -- are now available for pre-order from their website (www.rhbooks.com).

• Stickleback artist D'Israeli (aka Matt Brooker), currently working on a new project, Lowlife: Creation, has been discovering an old dog can learn new tricks thanks to an old book, How to Draw Comics the Marvel Way - funnily enough, a book I regularly recommend to aspiring artists, not talents like Mr D!

• Artist Andrew Wildman tells us there's an exhibition of art from his Frontier comic, which is running in The DFC at present. The exhibition is being held at Jaffe&Neale Bookshop in Chipping Norton and will run until 24th April. On 28th March Andrew and writer Jason Cobley will be at the shop answering questions and signing copies of The DFC. • No comic strip in this mag, but a quick plug for the latest issue of the really bizarre title The Chap, which features a fab feature on steampunk and a chap's guide to Doctor Who, "maddest of all scientists". Plus, Astronomer Sir Patrick Moore tackles The Chap questionnaire. If you think you might be a Chap, send them a photograph and they'll assess your Chappist credentials and may feature it in the mag. There are some comic creators who definitely qualify...

• Caption 2009 will be happening on Saturday 15th & Sunday 16th August at the East Oxford Community Centre in erm, Oxford. Mark your diaries now!

• Congratulations to former 2000AD editor and flat mate David Bishop (no, we never had Tharg round for tea), who has just penned his 40th issue of The Phantom, and completed the first draft of a talking book project for Big Finish. He says he can't reveal any more details about the latter job yet, "but it proved to be more fun than I'd expected."

• Rufus Dayglo has moved house and finished a Tank Girl cover for Judge Dredd: The Megazine. How organised is that?

• 2000AD artist Cliff Robinson is featuring the pencils and final inks of a 2007 Judge Dredd story he did with Mike Collins on his blog. "Mike and I had talked about working on a strip together for years and it was good to eventually team up with him on this Dredd story," he reveals. "I had an absolute blast working over Mike's blue line printed pencils ( I also had photo-copies of the 'normal' pencils for reference). We've also just recently finished collaborating on another Dredd strip which was just as much fun."

• Matt Badham points us to Guardian cartoonist Tom Gauld’s work is now up to browse at your leisure on Flickr. Ace!

• Warren Ellis reports that Angel of Death, a tv series for the net written and created by Ed Brubaker, starts today over on the Crackle web site. A new seven-minute episode every weekday for the next two weeks.

• Do you live in the North East and make comics? If so, comic artist, illustrator, shark wrangler, intrepid explorer, professional ninja and fighter pilot Leonie is keen to make contact with small press or self publishers. Contact her via her blog and spread the word. (Some of the description for her may not be true, but you'll have to visit her main web site to find out which at: www.lomoore.com.

• And finally... there's a review of Rian Hughes Yesterday's Tomorrows collection from Knockabout on Hipster Dad, praising the Dare strip but noting The Science Service script by one John Freeman "left me a little cold, as though it was waiting for a good deal more meat and background before letting readers embrace it..." Hey! I wrote that over 20 years ago. I think I'm a littel better now!
Posted by John Freeman at 11:08 pm