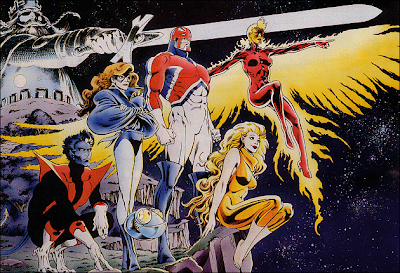 It's the start of 'classic heroes' month on Strip!, the fab radio show and podcast presented by Alex Fitch. This week, Alex is talking to two of the creators of stories featuring Britain's very own superhero - Captain Britain.

First in front of the microphone is Alan Davis, the artist and writer of the strip who first drew the square-jawed hero in the 1980s for Marvel UK, and. together with help from writers Dave Thorpe, Alan Moore and Jamie Delano, rescued the character from oblivion with esoteric storylines, a great supporting cast and a terrific new costume.

Alex also talks to author Paul Cornell about his recent revamp of the character in the new Marvel Comic Captain Britain and MI13 which sees the Captain get a 21st Century make-over while encountering such nefarious characters as Count Dracula and Gordon Brown!

Later, Alex talks to Paul about dramatising Iain M Banks' novella The State of the Art for the afternoon play which is broadcast later today on Radio 4 (Thursday 5th March), which featuresa cast including such luminaries as Anthony Sher and Patterson Joseph. (More info here on the Radio 4 web site: the play is part of Radio 4's excellent SF season which includes an adpatation of Sir Arthur C. Clarke's Rendezvous with Rama and John Christopher's Death of Grass).